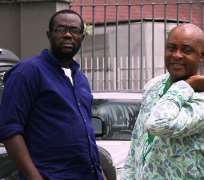 The accused persons were alleged to have conspired to defraud one Lady Lora Marire of a total sum of Sixty Six Million, Five Hundred Thousand Naira (N66.5Million) under the pretence of helping to register her as a contractor with the Nigerian Ports Authority and offering her a contract to build one hundred units of duplex at Lekki, Lagos.

Four other individuals involved in the scam are at large. They are: Tony Elijah; John Williams; Engr. Chude Ngini and Alkali Hammed.

Count One of the thirteen count charge reads: “Kachy Kennedy Okoye, Usong Ibor Matthew, Igberaese Lawry, Chekwu Tony Elijah (at large), John Williams (at large), Engr. Chude Ngini (at large) and Alkali Hammed (at large) on or about the 25th day of May 2010 at Ikeja within the ikeja Judicial Division with intent to defraud conspired to obtain the sum of N39, 100,000.00 (thirty nine Million One hundred naira only) from lady Lora Marire by falsely representing that the said sum represented the sum used by you for the registration of her company as contractor with the Nigerian Ports Authority and the award of a contract to her to build one hundred unit of duplex at Lekki Lagos”.

The accused persons pleaded not guilty to all charges.

Olubunmi Bosede, counsel to the EFCC prayed the court to grant an early date for hearing and remand the accused persons in prison custody.

Counsel to the third accused person, Austin Abkunimen, however said he had not filed any application for bail but aligned himself with the prayer of Samuel, claiming also that his client had health challenges.

SUSPECT, USONG IBOR MATTHEW BEING ESCORTED TO THE COURTROOM AT THE LAGOS HIGH COURT IGBOSERE. OCTOBER 30, 2012