How Aliko Dangote blackmailed, bribed his way to NSE Presidency 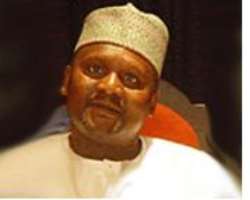 Now, the die is cast. Nigerian investors' fears over the emergence of Aliko Dangote a Nigerian Stock Exchange (NSE) Council President seems to have triggered a race to the bottom as more savvy institutional investors are re-channeling their funds to the 'safety' of government securities, treasury bonds and real estate.

It was intrigues and maneuver galore marked by intimidation, blackmail and shady financial dealings that eventually saw billionaire business magnate, Alhaji Aliko Dangote emerge as the 17th president of the Council of Nigerian Stock Exchange (NSE) through what was said to have been a unanimous voice vote.

But when a man with a big question mark hanging over his morally-deficient, corruption-bedecked neck is chaperoned to the topflight throne, it will take the greatest miracle after the resurrection of Jesus Christ to get the NSE back on track. The fact that Dangote; a prime suspect in the share manipulation scam involving African Petroleum (AP) Plc stock prices of Femi Otedola is now the man who will be calling the shots at the NSE, proves, in the words of an NSE source that: “Nigeria's capacity to shock and scandalize is infinite.”

Huhuonline.com has learnt that Dangote arm-twisted and bribed his way to the NSE presidency, dishing out as much as N3 million to each NSE Council members who subsequently “elected” him by acclamation. Also nominated was Erastus Akingbola, the Group Chief Executive of Intercontinental Bank, as the NSE 1st Vice President.

Akingbola's nomination, Huhuonline.com has learnt was the climax of horse-trading and sheer clunker philandering. Dangote has been at odds with Akingbola after Intercontinental Bank Plc, petitioned President Umaru Musa Yar'Adua asking for his intervention to help compel a "debt cabal" led by Dangote to re-pay the loans it took from Intercontinental Bank.

In a petition sent on its behalf by A.O.S Practice, a firm of legal practitioners, and dated August 5, 2009, Intercontinental Bank described Dangote as a loan defaulter and “rabid debtor” who is being daily serenaded in the media as an affluent Nigerian. A look at the three Dangote companies indebted to Intercontinental Bank as contained in the said petition shows that their cumulative debt profile stands at about N35.8 billion.

Intercontinental Bank also said: "To proceed to sue these institutions as ordinary legal dictates would suggest, is to get bogged down with the legal technicalities and slow pace of the adversarial practice of our judicial system, which these cabal would engage to wear us down.”

Recall that Aliko Dangote had been under intense pressure to resign from the council before the Annual General Meeting (AGM) of the NSE. The erstwhile NSE president, Oba Osundeko had asked Dangote to resign prior to the election, due to the market's perception of Dangote's alleged role in a price manipulation of African Petroleum Plc's shares. During a routine meeting of the NSE council in Lagos A committee of the council reportedly met and appealed to Dangote to resign.

But Dangote reportedly played hardball, employing underhand tactics and blackmail to force Osundeko to back-off and play ball. One of the issues involved Pivot Engineering Company owned by Osundeko which failed to execute government contracts awarded to it but collected payments. Besides, Osundeko was also a member of the “debt cabal” and was neck deep in debt to First Bank. In its petition, the bank made "a clarion call" on the President "to dismantle this cabal that is hiding under the auspices of the Federal government's fiscal and economic policies whilst gang raping our client, as with such other well meaning banks, that oil the economy of this great country. This gang-rape is obviously because we lack a credit registry or bureau in Nigeria where information and data on the credit history of persons and companies can be accessed to determine their standing in relation with other banks."

Although Dangote has denied that he owes the banks, Huhuonline.com investigations showed that Dangote group of companies have a debt overhang of about $400 million (N58 billion) owed various Nigerian banks and hopes of the affected banks to recover the loans are fading. Debtors like Dangote have seemingly kept the banks in suspense, forcing them to categorize the liabilities as bad debts that are being written off to cleanse the financial institutions' books.

The Central Bank of Nigeria (CBN) is flooded with petitions from some of the distressed banks, over difficulties in debt recovery, especially from the major five debtors including Dangote. Already, three banks have written off over N76 billion in loans, thereby assailing profitability and dividend payouts.

The choice of Dangote does not inspire investor confidence as he owns six companies (Dan sugar, Dan salt, Dan Flour, Benue Cement, Chevron Texaco, which are listed on the stock exchange. What will eventually happen when Dangote becomes privy to insider information about the stock prices of his companies can be anyone's guess. But this apparent conflict of interest has created a propitious scenario for insider trading and share price manipulation which Dangote is an expert.

The fact that Dangote suffers from incurable money-mindedness and will stop at nothing in his quest for personal gain is an ominous sign of the times that bodes ill for the future of the Nigerian Stock Exchange.