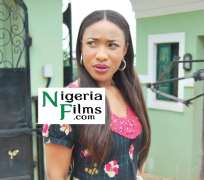 Tongues are already wagging on why the record label, Kas Records, in which the sultry actress, Tonto Dikeh recorded her highly condemned two singles, has refused to promote her song but another business he just ventures into, Kas Water.

Kas ( the Fimile crooner), we gathered, signed Tonto Dike sometime last year and as a matter of fact, Tonto Dike appeared on one of his tracks titled “Iyawo wind”. On Oct 17th, Tonto Dike released 2 singles that set social media networks on fire but the absence of a statement of support or promotion from her supposed label boss or even music collaborator Kas speaks volumes.

There are insinuations here and there that maybe the guy is too embarrassed to identify with such a bad product from Tonto or maybe the beautiful, good and sexy actress but bad singer is no longer signed on under Kas label. Wee need information please! MY RELATIONSHIP WITH MY EX-HUBBY- KATE HENSHAW

Ace comedian, Elenu, Proposes To Fiancée With A Plate Of Food (PHOTOS)