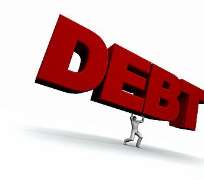 By Ade Ogidan (Business Editor) and Taiwo Hassan
An air of discomfort enveloped Nigeria's banking industry following disclosures that about five companies and their directors have literarily compromised funds of shareholders and customers of the financial institutions.

Already, the Central Bank of Nigeria (CBN) has opted for a full disclosure strategy to stem the tide of anxiety faced by the lending banks.

As at yesterday, over N1.25 trillion was being owed the banks by the high profile individuals and their companies, with a significant percentage of the debt stock in foreign currencies.

But the debtors have seemingly kept the banks on tenterhooks, forcing them to categorise the liabilities as bad debts that are being written off to cleanse the financial institutions' books.

Indeed, two of the companies and their directors have a debt overhang of $3.75 billion (N550 billion), with a further N280 billion representing the local currency component of their collective liabilities.

Another well-known group of companies, with an equally visible entrepreneur as its majority stakeholder, is allegedly owing $400 million (N58 billion).

Although some of the alleged debtors have denied that they owe the banks, hopes of the affected institutions to recover the loans are fading.

A survey by The Guardian indicated that objectives for which the loans were collected remained largely unachieved, with some of the banks strategising on how to present acceptable financials to their respective shareholders.

Some of the financial institutions, reeling under the pangs of the high bad debt stocks, have even been postponing dates of shareholders' meetings, while about two have decided to hold the mandatory forum in locations far away from Lagos, to prevent attendance by critical stakeholders.

The CBN is flooded with petitions from some of the banks, over difficulties in debt recovery, especially from the major five debtors.

Some analysts, who spoke to The Guardian yesterday, expressed optimism that the banks could eventually recover some of the debts, going by the CBN's current disposition, which favours full disclosure of transactions.

A former Managing Director of one of the defunct banks said in Lagos yesterday that chieftains of the financial institutions should discard alleged blackmails from the debtors and expose them in the interest of their respective shareholders and customers.

"The recent exposure of directors of failed banks and their debts was a step in the right direction. From the feelers I am getting from the banks, many of them are mere hollow shells as these big five debtors have literarily crippled them," he said.

The full disclosure option appeared to have got the CBN's nod. Recently, it sent a circular to all banks, demanding that they "submit to the acting Director of Banking Supervision details of their total exposures to the companies in the energy sector, namely upstream, downstream and oil service companies, as at May 31, 2009."

In stating the Central Bank's view that the Nigerian banking sector does not face a systemic risk, he said "our view is that there are stress points in banks' balance sheets (margin loans, proprietary positions, oil marketing names, unsecured large exposures) and these are being dimensioned."

The on-going court case involving Access Bank Plc and AP Plc has thrown up one such "stress points," and stakeholders await today's judgment, which coincides with AP's yearly general meeting.

Specifically, the two companies were at each other's neck over, which would be responsible for the shortfall of the exchange rate of Naira against the dollar.

According to Access Bank, AP has refused to pay the $35.1 million loan facility it granted it to import PMS into the country last year July.

The bank claimed that it entered into an agreement with the oil company in a transaction deal with the option that AP agreed to pay the loan within one year, but the company refused to honour the contract due to the shortfall of the dollar at the international market.

The bank said on July 18, 2008 it granted a letter of credit in form of a trade finance line to AP to facilitate the importation of petroleum products into the country, but the bank was stunned to hear that AP declined to fulfil the obligation, stating that it would not pay the difference in the dollar rate.

While reacting to this allegation in an interview with The Guardian in Lagos yesterday, the Chief Operating Officer of AP, Mr. Tunde Falasinnu, said that Access Bank's position against the oil company was in contrast to the agreement the two parties entered, relating to the importation of the petroleum products deal.

According to Falasinnu, AP has never in any way declined to pay the $35.1 million for the cargo that brought the petroleum products into the country, but what the bank was asking them to pay was not in line with the nation's official rate.

He said that the bank is one of the bankers that the oil company transacts business with, but relating to the specified oil contract, Access Bank was compelling the oil firm to pay the $35.1 million at $127 per dollar when the exchange rate as at when the oil business deal was transacted was $116.

Falasinnu explained that after series of meetings with the management of the bank over the matter to show understanding and the implication of the exchange rate, the bank decided that it would take a legal action against AP.

He, however, stated that in order not to go against the laws of the country and the wrath of CBN, the oil company decided to wait for the outcome of an investigation by CBN.

He went on: "Access Bank is a banker to AP Plc, one of our bankers, and we do transactions with them. On the 25th of July 2008 to be precised, they granted us a Letter of Credit for a cargo of PMS which worth $35.1 million.

"This, according to the transaction terms and regulation, was to be reopened after one year, which was opened as form M, and the form M was duly submitted to the CBN pending the time the exchange rate AP would pay to Access Bank when the obligation crystallises.

"As at the time the obligation crystallised, they debited us with N127 per litre of PMS that was N127.00 to a dollar. And as at that time, the official exchange rate was N116.82. So, when this letter came, we wrote a letter immediately, we protested that the rate they used was not the official rate and it was not acceptable except they want to tell us they have used the black market rate, even black market rate was lower as at then.

"Since that period, we have been exchanging letters between each other. In fact, I can tell you that I have exchanged more than 10 different letters within us. They were insisting that the rate they used for us was the correct rate as at that time. And now even as at today, or as at the time we were talking, the exchange rate has not gone beyond N127 they were claiming."

But Access Bank, in a statement yesterday, said the offer letter to AP stated that the "facility is subject to possible exchange rate risk and this risk remains the primary obligation of the customer and that there is no obligation on the part of the bank to provide the customer with funds (either in local or foreign currency) to repay any exposure from the utilisation of the facility."

Indeed, according to information, Access Bank offered AP the chance to cut its losses on the facility in dispute when the exchange rate started fluctuating and naira was falling fast, and offer which AP reportedly rejected.