VIOLENCE, PRESSURE AND A GOVERNOR'S QUEST FOR A NEW YOBE 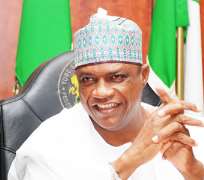 Scholars of human psychology are yet to agree on what state of mind or set of conditions are best suited for optimal human performance. Perhaps they will never agree. Some human beings simply collapse under the weight of pressure. Others, faced with the same condition, get a rush of adrenaline and perform beyond their wildest imagination. Journalists, students, and other deadline performers fit the latter category. Politicians, technocrats, and other people with cushy jobs, on the other hand, tend to fall in the former category. That is the broad agreement among scholars who study the psychology of human performance.

Given this background, I was curious to know how governors of states in the northeast sub-region have performed under the weight of the pressures that the Boko Haram insurgency has imposed on them. Have they collapsed like a pack of cards and given up on trying? Or are they performing like competitive deadline performers in spite of the unprecedented security challenges they’ve had to contend with in the last few years? I am interested in these questions both because I am from the northeast and because, as a student of psychology, I have an abiding research interest in performance under pressure. This week, I will start with assessing the performance of the Yobe State governor, Alhaji Ibrahim Gaidam, since the Boko Haram insurgency began.

To begin with, the unpredictable eruption of spasmodic violence that the northeast has been witnessing in the last few years are enough to derail or frazzle even the most valiant administrator.

This past week, for example, we were again reminded, in a brutal and callous way, how mindless and senseless violence can be. In the Town of Potiskum, Yobe’s commercial hub, criminals and terrorists unleashed one of the most unspeakable acts of barbarism that the northeast had seen. In three days of violence beginning last Thursday, they killed or slaughtered over 30 people, including women and children and set alight houses, public buildings and schools.

Such crazy acts of violence, going back nearly one year in Yobe State today, have had significantly negative effects that even the most sanguine person who believes in the capacity of the region to recover cannot but feel helpless.

In spite of this, however, it seems to me that Yobe State governor Alhaji Ibrahim Gaidam has defied the Boko Haram insurgency to keep faith with his pledge to bring about enormous improvements to the lives of the people who voted him in to power. That is the only way I can explain the massive developments the governor has recorded at precisely the time he could have been subdued under the weight of the security challenges thrown at him by Boko Haram—and similar criminal groups.

If you think I am making idle, sycophantic claims, consider this: At a time most other people in his situation would recoil and wallow in self-pitying lamentation, the governor started and completed several projects that have made remarkable impact in the lives of the people of Yobe State. I am going to mention only representative examples.

During the period under review, for instance, the governor started and completed a 300 housing units estate for people in the state in the space of just four months. These houses are located on the Gujba-Maiduguri bye-pass road within Damaturu metropolis. That is a record. Anyone who lives in Damaturu can easily confirm this. Similarly, in recognition of the fact that joblessness increases people’s disposition to be recruited for violence, the government, during this period, provided employment to scores of young people with varying levels of educational attainment.

I am aware, for instance, that over 3,000 national diploma, NCE and degree certificate holders were employed in the state civil service during the period under review. That is one of the largest-scale employment exercises I’ve heard of in Nigeria in recent times. Similarly, under his youth empowerment programme, he distributed hundreds of Keke NAPEP tricycles and other kinds of working tools to scores of unemployed youths in the state. These two initiatives—giving employment opportunities to mid-level and low-brow manpower—has drastically reduced the potential pool of people that could be recruited for the kinds of senseless violence that we have seen in these parts of the country in the past few years. Of course, clearly, more needs to be done, and I’m sure the governor is aware of this given his well-known relentless zest to beat his own record.

The governor also paid a lot of attention to the infrastructural uplift of the state. To mention just a few examples; at a time when some political opponents wanted to rattle him through what appears to be politically motivated violence under the guise of Boko Haram, he distributed 170 brand new pieces of power generators for boreholes across the 17 local government areas of the state to boost water supply; built the Gaidam Township road and drainage project and similar Township road projects in Potiskum, Gashu’a, Nguru and the State capital Damaturu. He also initiated other road projects in Gadaka, Bularafa-Gulani and pushed ahead with the rehabilitation of the Potiskum-Garin Alkali road which was built since 1980.

Governor Gaidam has also started work on the 370-kilometer Kanamma-Kafiya-Macina Road, dubbed the Trans-Saharan road project which will link the entire northern swathe of the State.

He has also began work for an Ultra-Modern Market in Damaturu; drilled scores of boreholes in representative communities across the state; constructed an office complex for the state’s Ministry of Land and Survey; constructed well-laid and exquisitely beautiful access roads within Yobe State University campus; and several others too numerous to mention.

Plus, the governor actually balances these projects across all the social strata of the state. For instance, during this period, I found that the governor initiated a programme under which each of the 17 local councils in the state got N300 million to execute community empowerment projects.

Boko Haram’s philosophy, as most people know, consists in a disavowal of western education. Of course, every real Muslim knows that Islam encourages the acquisition of knowledge whether it is Western or Eastern and that Boko Haram is merely deliberately distorting Islam. As if to damn Boko Haram and its retrograde philosophy, the governor appears to be deliberately intensifying his attention to the educational sector. During the time violence raged in the name of Boko Haram, the governor renovated many secondary schools in the state; constructed 12 new academic department buildings at Yobe State University in Damaturu; distributed 48 utility vehicles to all secondary schools across the state, and maintained regular payment of student scholarships, among many bold steps the governor has taken to improve the standard of education in the state.

It is clear to me that Governor Ibrahim Gaidam, despite being a politician, is actually a competitive performer under conditions of pressure and crisis. What could account for this? Is it the governor’s training as a classroom teacher? Or is it his background as a consummate accountant? Or is it his well-known trust in the Almighty God to settle the affairs of His servants? Maybe psychological researchers need to revise their theories. Whatever the case, as a Yobe State indigene, I know I speak for many people in the state when I say we are proud of Governor Ibrahim Gaidam’s modest interventions, especially in the light of the tremendous pressure that the last several months have imposed on him and other governors in the northeast.