Cole Free For England After Apology To FA Boss 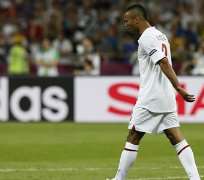 Chelsea defender Ashley Cole has apologised to English Football Association chairman David Bernstein for a Twitter insult he aimed at the FA last week and is free to play for England against San Marino on Friday.

Whether or not he earns his 99th cap in the World Cup qualifier at Wembley is up to coach Roy Hodgson but Bernstein said on Tuesday that Cole was free for selection.

The FA charged the 31-year-old with misconduct on Monday following Cole's offensive tweet after the governing body's independent commission had queried what they described as his "evolving" evidence in the John Terry racial abuse verdict.

Cole deleted the tweet a few hours after it was posted on Friday.

Bernstein, speaking to BBC radio before the official opening of England's new national coaching centre at St George's Park in Burton, revealed that Cole had followed his apology to the FA on Friday with a personal apology to the chairman.

"He apologised immediately on Friday and he came to see me last night and apologised to me personally," Bernstein said.

"He showed real contrition. He said he was really sorry. He is free to play for England over the coming matches. It is up to the manager to decide whether he plays or not."

Cole has until 1600 (1500 GMT) on Thursday to respond to the FA charge, that deadline falling just over 24 hours before the England match. He is also facing disciplinary action from his club.

Despite his apology, Hodgson may decide to rest Cole for the San Marino game to keep him fresh for the tougher qualifier against Poland in Warsaw next week. Leighton Baines could step in.

Hodgson told a news conference: "I know that if I leave players out of that game they'll say 'no I want to play' but it's good to have a selection problem.

"But more importantly for me I'm very pleased the chairman has gracefully accepted the apology from Ashley.

"I know how disappointed and saddened he is by this situation and I'm quite relieved as an England manager that this issue has now been totally resolved."