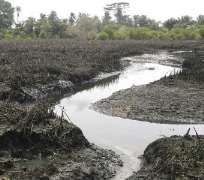 On 4th of August 2011, the UNEP team submitted their report on Environmental Assessment of Ogoniland to President Goodluck Jonathan. In that gathering, the President promised to look into the report, to which he promptly setup a committee to study the recommendations. Not minding the urgency of the recommendations, it took the President and his team one full year to take a position. This is particularly not impressive considering the President’s rich background and experience in environmental issues. The President holds a B.Sc in Zoology, an M.Sc in Hydrobiology and Fisheries Biology and a PhD in Zoology. He was also a former Assistant Director (Ecology) of the defunct OMPADEC where he was saddled with the responsibility of protecting the environment. The President is also a Fellow of the Nigerian Environmental Society, and rightly so. Therefore, if there is anyone that understands the damning nature of that report, without relying on the advice of some specialist, then it must be the President. I don’t need to go into the details of the findings of the report since I’ve done that in other articles. However, to summarize it, the report shows that the people of Ogoni are in dire strait. They continue to drink water contaminated with carcinogenic substances while they watch their land and river become barren.

Following months of complaints and protests about the poor handling of the report by the Federal Government, they finally came up with a statement one year after the submission of the UNEP report to Mr. President. The minister for Petroleum, Mrs Diezani-Alison Madueke, a one-time Executive Director of SPDC – the operator in Ogoni land, announced that the federal government has agreed to implement the UNEP report. She also announced the set up of the Hydrocarbon Pollution Restoration Project (HYPREP). According to a Press Release made available on the NNPC website, “the Project shall implement the recommendations of the UNEP report on Ogoniland as well as investigate, evaluate and establish other hydrocarbon impacted sites and make appropriate recommendations”.

1. The mandate to follow up and oversee implementation of the recommendations made in this report, as well as any other matters that the Federal Government may wish to assign to the Authority

2. The Authority will have a fixed lifespan, initially of ten years. Within this time the key elements of the restoration should be in place and overall institutional strengthening achieved. After ten years the Federal Government, on reviewing the status of the environmental restoration and the overall institutional capacity, may either extend the Authority’s mandate for another term or redistribute the tasks to the other, strengthened, agencies

3. The Authority will work under the Federal Ministry of Environment

4. The Authority’s staff will largely be seconded from relevant national and state institutions

Instead of implementing this first recommendation, the government decided to set up the over-hyped “hydra-headed” HYPREP. The HYPREP announced by the federal government apart from taking on a different name other than the recommended seems to have a different mandate as well. The scope also seems to extend beyond Ogoniland. Also, while the Ogoniland Environmental Restoration Authority is project specific, HYPREP seems to have a mandate that extends beyond the UNEP recommendations. That leaves one wondering if this bogus structure will not suffocate the project-specific objectives and time-bound recommendations as stated in the UNEP report. This is not to say that other areas in Niger Delta do not need similar treatment, but here we are talking about a report that presented scary scientifically proven facts about a specific area and gave context specific recommendations. Leaving these project-specific recommendations to chase a broader agenda while the people continue to sip hydrocarbons and inhale the stench of dead aquatic animals is not in the best interest of the people.

Also, the UNEP report recommended the creation of an Environmental Restoration Fund for Ogoniland. The report recommends an initial capital of $1 billion, with contributions to be made by NNPC and SPDC. The report recommends that management of the fund shall be the responsibility of the Ogoniland Environmental Restoration Authority. In announcing the creation of HYPREP, the federal government was silent on this aspect. No mention was made of the funding, the exact budget and the ratio of contribution by NNPC and SPDC. There was also no mention of the projected life span as well. A project like this needs the highest level of transparency to build trust and confidence between the people and all stake holders. That has not been the case thus far.

Another major concern is the secrecy surrounding the structure and modus operandi of HYPREP. Who do they report to? The Minister for Petroleum Resources or the Minister for Environment? For me, the oversight ministry should be the ministry of environment since the petroleum ministry is an interested party. I might not be a lawyer but at least I know the meaning of: Nemo Judex in Causa Sua. The exact structure has not been made public, at least not to my knowledge. But going by the two HYPREP bill boards I saw recently (at Kira Junction in Tai LGA and along Aba Road by St Johns), the messages were signed off by the Department of Petroleum Resources. Does that mean they are the oversight department? Same ministry that supervises oil exploration in the country, that left the host communities with such unbelievable level of pollution are the once to supervise the clean-up? Ridiculous! Little wonder the message on the billboard was only directed at those engaging in oil theft. No message was left for the irresponsible operators that caused the bulk of the pollution in the first place. Maybe they think the only source of pollution is from oil theft. What is the role of NOSDRA in this? What is the role of the Ministry of Environment? They are the most appropriate government ministry/department that should have oversight role. Statutorily (NNPC Act) the Minister for environment is the chairman of the Board of NNPC, therefore asking HYPREP to report to the minister who is the Board Chairman of same NNPC that is partly responsible for the pollution in Ogoniland is not the right thing to do.


Also of concern is the report that certain politicians are lobbying to be appointed the Coordinator of HYPREP. I sincerely pray this should be a false rumour. The UNEP report is a scientific report with empirical evidences on the high levels of contamination of the soil, water and biota. It also makes specific recommendations, the bulk of which are scientific in nature. Therefore, the leadership of such a body saddled with the responsibility of implementation of the report should be vested in a professional with extensive experience in this area. We do not want a coordinator that will have 30 Special Advisers to function optimally. If they want to succeed, HYPREP must be handled by competent leadership with good understanding of the scientific and socioeconomic recommendations and not just some politician. HYPREP in the hands of a politician, is prepped to fail!

This is one issue that I’m sure will be used to judge the performance of President Jonathan. How the President handles the clean-up and restoration of Ogoni land will likely be used as a template for some other communities suffering same plight. A wrong approach will set the wrong precedence, especially for the suffering people of the Niger Delta. As mentioned earlier, the response time has not been impressive thus far. We hope government will make up for the lost time by ensuring the right thing is done, one of which is to appoint the right calibre of leadership and not politicize the clean up and restoration of Ogoni land.

Let me end with this. Recently, I went to Bonny via the water front in my home town, Bodo City (Gokana LGA in Ogoni). As I tried to settle down in the boat, amidst the stench of crude oil, I noticed a badly disfigured sticker of a smiling Present Jonathan soaked in oil sheen on the body of the boat. I could easily recognize that sticker because it was made and distributed by a non-partisan group (The Jonathan Project - that volunteered to work for the success of the GEJ Presidency) to which I happened to have being the Strategy Coordinator back then. I remember how the ordinary rural dwellers in that community thronged round the person I gave the sticker to share just to have a copy. In less than an hour, hundreds of stickers were exhausted and they came asking for more. They loved the President! These poor farmers and fishermen went ahead to vote massively for the President.

They did so because they believed President Jonathan understood their problems and so would solve it without prejudice. Their major problem was (and still is) the barren land and the “dead Sea” occasioned by the pollution from hydrocarbon. Most of them were interviewed by the UNEP team during their investigations and they hoped none other than President Jonathan will be in the best position to ensure the restoration of their land and sea to the once flourishing pristine state. Today, the river is still a colony of hydrocarbon and the land still belches crude oil. Today, those beautiful stickers of a smiling GEJ are soaked in crude oil. The people certainly deserve better. HYPREP must be prepped to succeed and not fail. Like I always say, history is taking minutes.