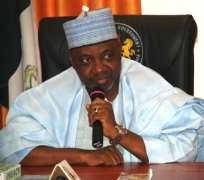 ABUJA, September 28, (THEWILL) – Vice President Namadi Sambo has directed the Ministry of Power and the Niger Delta Power Holding Company (NDPHC) to ensure speedy completion of transmission lines and the injection substation in order to raise power supply beyond the current generation capacity of 4,200 megawatts.

Sambo gave this directive at the State House, Abuja, on Friday while chairing the 24th board meeting of the NDPHC, the company overseeing the National Integrated Power Projects (NIPP). At the meeting, he also directed the convening of a meeting to tackle the problem of gas supply to the power plants.

“He also directed the NDPHC to ensure that such performance contract trickles down and that all of its consultants sign a performance bond, which would enhance service delivery,” confirmed a statement by Senior Special Assistant to the Vice President on Media and Publicity, Alhaji Umar Sani, Arc Sambo.

Earlier Minister of State for Power, Arc Darius Ishaku, disclosed that the country currently generates more than 4,200 megawatts of electricity but lamented integrity issues in the transmission and distribution network, causing problems in the evacuation of the generated power. He assured that the ministry was making necessary efforts to address the issue.

Also speaking, Managing Director of NDPHC, who was represented by Executive Director, Technical Services, Mr. Louis Edozien, revealed that the NIPP projects in Sapele, Alaoji, Olorunsogo and Omotosho currently generate 1,350mw. But he observed that more would have been generated were it not for gas supply.

The board, under Sambo’s chairmanship, approved the purchase of replacement parts for Gas Turbines for Calabar, Egbema and Gabarin power plants from General Electric the original manufacturers.