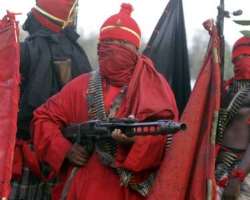 It is official: militants who do not give up their arms and embrace President Umaru Musa Yar'Adua's offer of amnesty by October 4, 2009 will be considered “criminals” thereafter.

The details of the amnesty, signed by the President at 5pm yesterday, are to be released to the media tomorrow by 11am at a press conference by the Presidential Committee on Amnesty and Disarmament.

Yar'Adua said the offer of amnesty is predicated on the willingness and readiness of the militants to give up all illegal arms in their possession, completely renounce militancy in all its ramifications unconditionally, and depose to an undertaking to this effect.

This offer of amnesty is open to all militants for a period of sixty days.

Yar'Adua, in his amnesty proclamation, said after due consultation with the National Council of States and in exercise of the powers conferred upon him by the provisions of Section 175 of the Constitution of the Federal Republic of Nigeria, “I hereby grant amnesty and unconditional pardon to all persons who have directly or indirectly participated in the commission of offences associated with militant activities in the Niger Delta;

“The pardon shall take effect upon the surrender and handing over of all equipment, weapons, arms and ammunition and execution of the renunciation of Militancy Forms specified in the schedule hereto, by the affected persons at the nearest collection centre established for the purpose of Government in each of the Niger Delta States;

He said the twin-challenge of democratic consolidation and economic regeneration “calls for unbridled patriotism and single-minded, people-focused, results-oriented, resolute and courageous leadership at all levels. We cannot afford to fail. Let us use today's proclamation of amnesty to herald a new beginning for our Fatherland.

“As I append my signature to the Proclamation, I pray that Almighty God continues to bless our dear country, Nigeria.”

The National Council of State had earlier endorsed the much-anticipated proclamation of amnesty, but denied reports that the Former Chief of General Staff (CGS) Lt.-Gen. Oladipo Diya and 67 others convicted for the alleged attempt to overthrow the regime of the late Head of State, Gen. Sani Abacha, were to be pardoned by Yar'Adua.

The body, at the two-hour meeting which described the amnesty initiative as the boldest step taken by government in the history of Nigeria towards tackling the Niger Delta crisis, gave Yar'Adua the nod to announce the details and terms of the amnesty to the nation via nationwide wide broadcast.

Sylva commended the “boldness” of the initiative and said the “genuine militants” in Bayelsa State, for instance, have expressed willingness to take up the amnesty but stressed that at the lapse of the stipulated time, “criminals elements will be weeded out”.

The Attorney-General of the Federation and Minister of Justice, Chief Michael Aondoakaa, described the amnesty offer as evidence by the Yar'Adua administration to show commitment and respect to human rights and resolve the Niger Delta crisis.

On the reported presidential pardon to be approved for Diya and co., Aondoakaa said: “I was surprised to see on the pages of newspapers today that the council will give pardon to certain categories of military officers. That did not come before council today it was not part of the agenda. It can be considered on a later date after due consultation with military authorities. Then it can be presented to council.”

He however disclosed that the Council approved pardon for some civilian prisoners, especially those that had been on death row for prolonged periods of up to 20 years.

He said the Council took note of an earlier circular issued by former Chief Justice of Nigeria, Alfa Belgore, instructing judicial officers to convert to life jail sentences any capital punishment not executed within two years.

“Let me clarify on the issue of amnesty. The Council is not the right body that is supposed to constitutionally advise Mr. President on Section 175 on the issue of the amnesty to the militants. The matter is being decided by the highest body (NCS) today to assure the international community and all Nigerians that we are prepared to follow the due process. We are prepared to respect human rights and follow the law in resolving this issue of Niger Delta,” he said.

But Noble laureate, Prof. Wole Soyinka, doubted the sincerity of the government on the amnesty offer in a statement entitled “Between Amnesia and Amnesty” which he issued yesterday.

“I should reveal at this point that the Nobel initiative (a global body of Nobel laureates seeking solution to the Niger Delta crisis) did not end with a transmitted report. David Philips, Secretary to the Commission, sought and obtained an audience with President Yar'Adua in New York during his visit to the United States for the 2008 THISDAY event – Nigeria Meets the World.

He came away from that meeting with uncomplimentary observations on the lack of informed seriousness on Yar'Adua's part over this ticking time-bomb. Phillips concluded that he expected nothing of value to emerge from his meeting with the Nigerian Head of State, any more than could be expected from the Commission's report itself.

“He has been abundantly proved right. The Delta crisis is not the Middle-East dilemma, and does not require the high-powered serial rituals of negotiations that still characterize the Middle East, or indeed the Yugoslavia scenario in a not so distant past.

The matter is straightforward. As MEND statements have periodically emphasized, the Delta crisis is the mere purulent tip of the Nigerian boil, now prodded into a violent eruption in a particular region. Over and over again, it has been stressed that nothing but a holistic approach to internal re-structuring will serve the nation.

Not only is this historically inevitable, such an approach provides a context within which the aggrieved oil-producing areas can feel a genuine relatedness to the national question. The stubborn retention of the status quo, and its manifest rejection by component parts, is at the heart of the Delta crisis,” Soyinka said.

“President Yar'Adua's lackadaisical approach towards these contentious issues has become increasingly clarified as not one of governance indifference or lack of understanding, but of complicity through inaction. It is studied and purposed, the complement of the frenetic inaction of his predecessor. The only difference is that the Ota farmer (former President Olusegun Obasanjo) fabricated a lot of deceitful motions – what I have termed frenetic inaction - to provide a cover for ensuring the status quo, while his successor cannot be bothered with such pointless exertion. His preference is the posture of a somnolent spider that has learnt to outwait and outwit noisome flies,” he said.

Soyinka added: “Finally, should such an Amnesty be broad enough to embrace even the criminal opportunists of the struggle? Absolutely not. That would be as much as to say that Amnesty also embraces those accused, or proven guilty of war crimes, such as the officers who took part in the cold-blooded shooting of two brothers – among similar, less publicised crimes – against the innocent citizens of the Delta region.

Indiscriminate bombings and saturation bombardment of villages 'suspected' to harbour sought militants must be investigated and the guilty charged. Orders began somewhere.

Those orders were given, and those orders were carried out. Who gave the orders? Has Umaru Yar'Adua yet launched a commission to enquire into the extra-judicial, cold-blooded murders of the two Gbaramatu brothers? I hope not.

“There is no need for a commission. Names, locale, time and witnesses – including video records - are sufficient to have initiated an internal enquiry that should now move to the public sphere as criminal proceeding. Will Yar'Adua seize this chance to dissociate himself from the peacetime massacres that became commonplace under his predecessor, and commit the nation to a humane morality even in time of war? That question hangs for now but, like the question of detainees, constitutes a strand in the fabric of Amnesty that will either enfold the militants or catapult them deeper into the violent zone of alienation.”

Also, the Senate said yesterday that it was saddened by the Niger Delta crisis and appealed to the Executive arm under President Yar'Adua to pursue the amnesty initiatives, with which it planned to end militancy in the region, to their logical conclusion.

Eze added that the Niger Delta crisis had become an international problem because “the ripple effect of what is happening is ruining the price of oil in the international market and it is affecting economy worldwide and is affecting lives here in Nigeria. If truly supplies to Warri and to Kaduna have been cut off as NNPC is saying, then of course, the country is bracing for another hardship; fuel queues are coming back… We cannot resolve the Nigerian question without the Niger Delta question”.