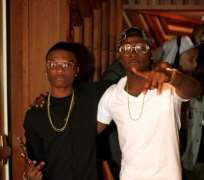 Some days ago, it was all over many entertainment news media that 'omo baba olowo' Davido was in a bitter fight 'holla at your boy' Wizkid. It was even reported that at the recently concluded Nigeria Entertainment Awards (NEA) in New York, USA, Davido left the hall with his crew while Wizkid was about to perform.

In an exclusive interview with AMC on the reported fight, Davido denied having any bad blood with Wizkid. He stated that he is still his (Wizkid's) brother. In his words, "he is my brother, my nigga. We are just making money."

For now, Wizkid has yet to speak on the matter. But there are indications that both pals are no more in good terms.

Panic Grips Ngozi Nwosu's Friends Over State of Health, May Be Flown Abroad For Kidney Transplant