China's Xi Not Seen In Public Because Of Ailment: Sources 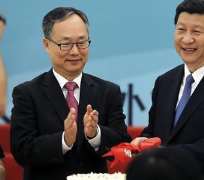 China's top leader-in-waiting Xi Jinping, who has set off a storm of rumors after not showing up at scheduled public events for more than a week, is nursing an ailment, possibly a back injury suffered while swimming, sources said on Tuesday.

Xi, who is due to take over the presidency of the world's second-largest economy in March next year, has skipped several meetings with visiting foreign leaders and dignitaries over the past week, including U.S. Secretary of State Hillary Clinton and the prime ministers of Singapore and Denmark.

China's government, however, has declined to spell out what is ailing Xi, 59 - in keeping with decades of official secrecy over the health of senior leaders, a tradition viewed in the West as out of step with a modern state and emerging superpower.

"Xi injured his back when he went for his daily swim," a source close to the Beijing leadership said after Xi's absence from the public stage was first noticed last week. At that stage, he had failed to keep scheduled meetings with Clinton and Singapore Prime Minister Lee Hsien Loong.

The source declined to give further details on the injury, including exactly when and where the incident took place.

Another source also said the injury happened when Xi went swimming. "Xi pulled a (back) muscle when he went swimming," the source said.

A third source, citing people close to Xi, said: "He's unwell, but it's not a big problem."

All three sources spoke on condition of anonymity.
The lack of an official explanation has fuelled Internet speculation surrounding Xi's condition, and brought some pointed questions at briefings by China's foreign ministry.

On Tuesday, the ministry's spokesman Hong Lei was asked whether Xi is in good health. Sticking to his government's usual reticence, Hong said he had no information to give. But he appeared dismissive of any hint that Xi might be in a bad way.

"I hope you can ask a serious question," Hong said when asked to confirm that Xi was alive.

"What's up with the crown prince? He's vanished for the last 10 days or so and the whole world is wondering where he is," wrote one user.

Despite the panicky rumors, some of China's top officials continued to travel outside Beijing -- not what would be expected if the leadership was consumed with crisis. Premier Wen Jiabao gave a speech in the northern port city of Tianjin, and his likely successor, Vice Premier Li Keqiang, was visiting a northwestern region, according to state media reports.

Xi had been scheduled to meet visiting Danish Prime Minister Helle Thorning-Schmidt on Monday afternoon for a photo opportunity, according to a media advisory that had been circulated on September 5. But the event did not take place.

Thorning-Schmidt told Reuters in an interview that a meeting with Xi had never been on her program, which was released on Friday.

"I think there has been a slight misunderstanding," she said. "I would, of course, very much like to see him (Xi) and I think I will see him at some stage, perhaps on my next visit to China, but he was never in my program which we released on Friday, so there shouldn't be anything new in my not seeing him."

The foreign ministry's website shows Xi's most recent public appearance was at a ceremony at the ruling Communist Party's Central Party School in Beijing on September 1.

The rumors about Xi come at a tempestuous time for Chinese politics. The 18th Communist Party Congress, at which China's next top leaders including Xi are likely to be unveiled, is set to take place in October.

Earlier this year, senior politician Bo Xilai, once seen as a candidate for the top rung of party leadership, was suspended from the Politburo and his wife convicted of murdering a British businessman. The wife, Gu Kailai, was given a suspended death sentence last month.

In another scandal this month, a senior ally of President Hu Jintao was demoted after sources said the ally's son was involved in a deadly crash involving a luxury sports car.

China has been engulfed in the past by rumors about senior leaders.

Last year, the official Xinhua news agency was forced to come out with a one-line statement in English denying former President Jiang Zemin had died, following feverish online speculation and a report from a Hong Kong television station.