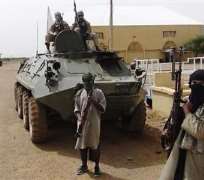 Mali Islamic militant group MUJWA said on Sunday the killing of 16 Muslim preachers including eight Mauritanians and eight Malians by an army patrol in Mali was a declaration of war.

The Movement for Unity and Jihad in West Africa (MUJWA) is one of the Islamic groups that has hijacked a Tuareg rebellion in northern Mali since April with the intention of imposing sharia law in the country.

"With this barbaric act that was not warranted, I don't see any future for Malian army or the Malian government because we are going to continue our southward push to Bamako. This was a declaration of war," said Oumar Ould Hamaha, a senior Islamist speaking on behalf MUJWA.

"The 16 were moderate Islamists. They were killed at a checkpoint in Diabaly in the Segou region, close to the Mauritanian border," he told Reuters by telephone.

He said the preachers were travelling in a convoy to the capital Bamako for a conference when an army patrol opened fire.

After initially limiting its presence to the three regions of Gao, Timbuktu and Kidal, MUJWA retook the town of Douentza at the crossroads of north and south Mali on September 2, raising concerns it would move towards Bamako.

The Malian government confirmed in a short statement on Sunday evening that: "An incident occurred at the Diabaly checkpoint on Saturday evening during which 16 people including eight Mauritanians and eight Malians were killed by gunshot."

It said an investigation has been launched.
A Malian army officer based at the Segou military camp told Reuters by telephone an army patrol had attacked first in order not to be caught by surprise.

"It was in response against an attempted incursion of the Islamist group. Elements of our patrol did not wait to be ambushed because they had been following the movement of the group," he said, requesting not to be named.

CHAOS
Mali has been mired in chaos since March when soldiers toppled the president, leaving a power vacuum that enabled Tuareg rebels from the north to seize nearly two thirds of the country.

Mohamed Coulibaly, one of the organizers of the conference said the 16 preachers killed were expected to attend the event starting on September 14 in the Malian capital.

"They were stopped and searched at a checkpoint and nothing was found. They were not armed. They even called to alert us that they had been stopped at the checkpoint and we alerted the authorities in Bamako," Coulibaly told Reuters at the Dawa Mosque in the Banankabougou neighborhood in Bamako.

"We were surprised to hear this morning that they were all killed," he said.