Countdown to 2025…Do It Somehow 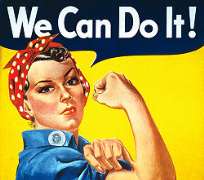 By Cawike Chibuzor, Jos, Plateau
As we countdown to year 2025, it is instructive to note that the countdown is not a prayer for our politicians to turn into miracle workers or a prayer to stop them from looting public fund and channel the tax payers' funds to transforming Nigeria from the richest third world Country into a leading Industrial Nation.

It would be a welcome development if somehow a real leader emerges between now and year 2025, that will be committed to sanitizing the system. But for more than 100million Nigerians to sit back and hope that some politician somewhere will be a solution to Nigerian's problems could turn out to be a waiting for Godot.

It is interesting to be alive at a time like this in a great Nation like Nigeria that has the potential to be a world leader in any area of human endeavour. If you dare to pick up the gauntlet and solve a problem in your community today, you might on your way to becoming an expert in a field, and could shape the way the problem is solved tomorrow.

The Internet is the single invention that has totally changed how we live our lives in the new millennium. The kind of profound impact it has had already on the way we live and transact business, and the potential it has for more transformation in our lifestyle can only be compared to the impact of electricity to civilization, yet the internet was only a mere answer to the need for computers in different locations to share information.

In the earliest stage, the internet was merely for the military, before it was later introduced into the civilian world. Suddenly, some very young men started dictating the pace things are done through the net, thereby creating unimaginable wealth.

The Google search engine led the revolution by the invasion of the internet by young Larry Page and Sergey Brin, while they were at Stanford University, and as the world marveled how young University students could be creating so much wealth, Amazon.com's Jeff Bezos brought a new dimension to the Google revolution, and as if to confirm that it does not need to take a generation to create a monumental wealth anymore, Mark Zuckerberg notched the frontiers a little higher with the facebook. All these have caused these individuals to create more wealth than most governments of the industrialized nations. While all these took place in the United States , one of the most industrialized nations in the world, where an average citizen can afford to remain idle and live on social security, the result of entrepreneurship in China is even more remarkable.

Few years back, China had the largest population in a single country, living below poverty level. Their large population was a major burden as they were finding it increasingly difficult to feed themselves. As a communist nation, the state controlled the means of production and tried to meet the needs of its citizens without much success.

It must be noted that government has never done well in business anywhere in the world and as long as they tried to control the means of production in China, the Chinese could not grapple with poverty, respite came only after the citizens were released to entrepreneurship. Today their large population is an asset, as no nation can rival them in cheap and high quality labour force. Every giant in the manufacturing world as an unwritten rule has a factory in China or other Asian countries. However, when they started, many people including Nigerians laughed at them, but they kept at it.

Though we claim to practice capitalism, we are inadvertently practicing communism, because we as citizens have surrendered all the means of production to the government, and are waiting for them to do the impossible by succeeding in business. We must realize that government will always strive to hold on to the means of production, though they are not good at it, until the citizens rise up and take them by creating a robust private sector.

In a real democracy the people are the custodians of power, and decide who they give it ton in trust from time to time. They can actually retrieve power from those they gave it to, if the elected leader lacks the initiative to manage the power.

In our democracy, the people might not be able to retrieve the power from those they gave it in trust through the ballot box, because those because those that are holding the power are suddenly behaving like the monkey who climbed down from a very tall tree to collect a cup of water from you, only to climb back to the top of the tree with the cup, while beckoning on you to come and collect the cup.

We must decide to collectively create enough wealth that will make elected officials in Nigeria pause and listen to the private sector. Wealth commands attention anywhere, and anytime. Less than twenty years ago, the United States of America held China in so much contempt that successive American Presidents never visited the country and cared less what they did. Suddenly in the last few years, successive American presidents have not only visited the country, but China is now a major consideration not only in America 's foreign policy but in their budget preparation.

What you do today holds the key to what Nigeria becomes in 2025. Dare to do something worthwhile.