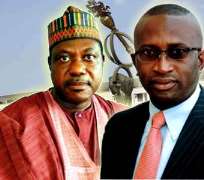 Ndoma-Egba made the warning in response to reports claiming knowledge of Senate majority’s plot to remove Akume from office as the minority leader. He denied that such plot was on.

“Our attention has been drawn to newspaper reports stating that the Senate Minority Leader, Senator George Akume, claimed that there is a plot to remove him from office and that the Senate majority leadership is behind the alleged plot,” a press statement signed by Ndoma-Egba wrote.

He emphasised that the workings of the National Assembly, particularly the Senate, do not place the emergence or removal of a Senate minority leader within the powers of the Senate majority leadership.

“Senator Akume’s allegation is, therefore, a tissue of unguided and misplaced falsehood. The allegation smacks of ignorance on how Senate businesses are conducted because the majority party does participate in the election or removal of the Minority Leader.

“It is, therefore, imperative to state, for the avoidance of doubt, that the Senate majority leadership is neither interested nor involved in any alleged plot to remove Senator Akume as Senate Minority Leader.”

Ndoma-Egba then urged Senator Akume to “provide the expected leadership for the minority parties of the Senate and stop making inflammatory statements that will create a semblance of crisis in our cohesive and united Senate.”