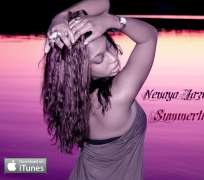 Nenaya Jazmine paraded her first unofficial gospel single "I think" to various radio stations across Lagos and Abuja, the response was fair and the track received decent airplay. Nenaya Jazmine is originally from Abia state but was born in Manila, Philippines; grew up in South Korea, Japan and Israel, and had visited over a dozen countries before her 15th birthday, all courtesy of having a diplomat for a father. She moved to the United States shortly after the loss of her father and proceeded to further in her studies. Unable to stay away from her love for the arts, she opted to reconnect with her musical aspirations and in 2010, released her first official single "Cloud Nine", to which she shot a music video. In 2011 she followed up with a remix of 'Cloud Nine' where she featured up and coming Nigerian rapper L.A.C.E. Apart from dabbing into her musical aspirations, Jazmine also aspires to produce films and commercials. She produced a promotional video for L.A.C.E.'s second single *"On the Block"*. She continues to work on independent projects like 'Follow Nenaya Jazmine to Accra, Ghana', which documents her 2010/2011 trip to Ghana. She actually produced and edited the entire 15 minute 'music-documentary' herself and shot most of the scenes. The video has close to 10,000 hits on YouTube. Nenaya also produced the promotional video 'Shout out to VIO Africa', which was done for YouTube giant – TruAfrica. Jazmine currently shuttles between the United States and Nigeria, as an independent artist who releases projects through 'Books Media'. She hopes to continue with her aspirations whether in front of, or behind the camera.

Nenaya Jazmine presents her latest single "Summertime", which she describes as 'laid back' and 'an easy listen'. Her intent was to capture the essence of summer time with a song. She confesses that she'd always wanted to do an ode to summertime. The music video for "Summertime" was shot in the U.S. Check it out!