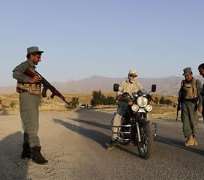 In the cloistered circles of the Taliban high command, Mullah Abdul Ghani Baradar had no equal.

As military chief of the hardline Islamic movement that once ruled Afghanistan and was ousted by a U.S.-led alliance, he oversaw the campaign of ambushes and roadside bombings that proved his fighters could threaten the most advanced armies.

When the talismanic leader was caught in the Pakistani city of Karachi in 2010, some Afghan officials hoped the magnetism he forged in war would persuade his former comrades to start talking peace. Indeed, news that Islamabad had allowed Afghan officials to visit Baradar two months ago sparked speculation in both countries of the prospects for a settlement.

Instead, Pakistan's refusal to hand him over to Afghanistan symbolizes one of the biggest obstacles to negotiations: a legacy of bone-deep suspicion dividing the neighbors.

Afghanistan fears that Pakistan is only pretending to support dialogue while its intelligence agencies harbor Taliban leaders to project influence across their shared frontier.

Any move to repatriate Baradar would raise Afghan hopes that Pakistan is willing to play a genuinely constructive role and open the door to other prominent insurgents.

"Releasing Mullah Baradar would encourage other Taliban leaders to embrace reconciliation," Ismail Qasemyar, an adviser to Afghanistan's High Peace Council, told Reuters. "It would be a huge symbolic step."

Members of the council, who are charged with reaching out to insurgents, aim to visit Islamabad in the next few weeks to make a fresh plea for Pakistan to allow Baradar to return to Kabul as a guest of the Afghan government.

With the United States and its allies due to withdraw the bulk of their combat forces by the end of 2014, pressure is mounting on President Hamid Karzai to start meaningful negotiations with the Taliban and prevent violence spiraling.

But there is no guarantee Pakistan will agree to release Baradar, or that he retains enough influence to play a decisive role.

"We are fully cooperating with Afghanistan in whatever they are asking for the peace process," Pakistan Interior Minister Rehman Malik said in a recent interview.

"For developing peace in Afghanistan, we are giving every kind of help. We have given access."

He did not comment further on the subject.
The Afghan government believes Baradar is more amenable to dialogue than many of his comrades.

In the months before his arrest, Baradar authorized contacts with United Nations representatives to explore the possibility of dialogue, according to former U.N. and Taliban officials.

Afghan officials believe Pakistan detained him as part of a broader strategy to retain a veto over any eventual settlement in Afghanistan.

More cautious voices argue that negotiations will only work if Karzai broadens his strategy of lobbying prominent insurgents to defect into a wider process to address the roots of Afghanistan's conflict.

Pakistan, for its part, will have to radically rethink the terms of its long-standing relationship with the Taliban before it can consider meeting Afghan demands.

HARD WORK
Taliban folklore has it that Baradar was present on the day in 1994 when Mullah Mohammed Omar, the Taliban's leader, launched his campaign to cleanse Afghanistan of rapacious warlords by hanging one particularly loathsome militia chief from the barrel of a tank.

Their friendship bolstered Baradar's stature during the Taliban's march on Kabul and its 1996-2001 reign. The Taliban government collapsed after the United States and its allies attacked Afghanistan for harboring al Qaeda leader Osama bin Laden, the architect of the Sept 11, 2001 attacks in New York and Washington.

Mullah Omar bestowed him with the nom de guerre "Baradar," which means "brother". Although a ruthless fighter, Baradar had a knack for forging compromise, another trait that appeals to mediators.

Baradar was captured in early 2010 in the Pakistani port city of Karachi in a joint operation between Pakistani intelligence officers and the CIA.

Some argue that more than two years in detention have eroded his sway over an evolving insurgency.

The Haqqani network, which has used havens in Pakistan to launch attacks on Kabul, is showing signs of growing independence from the Taliban hierarchy.

And a blistering campaign of U.S. night raids on Taliban commanders has weakened Mullah Omar's chain of command.

What does seem certain is that Baradar's return would give Karzai's outreach more credibility among Pashtuns, the community that dominates southern and eastern Afghanistan, where the insurgency is strongest.

The captive's mystique is burnished by his status as the highest-ranking Taliban commander to hail from the Popalzai, the same Pashtun sub-group as Karzai.

"If Mullah Baradar joins the government, 80 per cent of the problem with the Taliban will be solved," said Haji Obaidullah Barakzai, a lawmaker from Uruzgan, the southern province where Baradar was born.

KABUL'S SUSPICIONS
Baradar's capture after he authorized his followers to contact U.N. officials has sharpened Kabul's suspicions that Pakistan's military is intent on using its leverage over the insurgents to shape any future settlement.

Pakistan's security establishment backed the Taliban's rise in the mid-1990s as part of its policy of sponsoring Islamist militants as proxies in a struggle with nuclear rival India.

Pakistan joined the U.S. war on terror in 2001 and backed the attack on its former allies in power in Kabul, but, at the same time, maintained unofficial links with the Taliban. Many of its fighters are based in the border regions, where Pakistan's own Pashtun community lives.

Some Western diplomats in Islamabad believe Pakistan's generals are reviewing their relationship with their increasingly troublesome assets. Many of their home-grown militant groups have turned on their former masters. An embarrassing raid on an airbase outside Islamabad on Thursday was only the latest display of the threat they pose.

For now, Pakistan has chosen to hedge. The military has made some moves to facilitate dialogue while avoiding irreversible steps that might diminish its sway over the insurgents.

For example, Pakistani intelligence allowed Taliban envoys to travel to Qatar for talks with US officials late last year. Hopes that the discussions would lead to a confidence-building prisoner exchange have, however, yet to materialize.

Some Afghans detected a further shift in February, interpreting a Pakistani pledge to support dialogue as the country's first admission that it had sheltered the Taliban.

That was followed by the decision to allow Afghan officials to meet Baradar in detention.

Repatriating Baradar would require a much bigger leap of faith. Although Pakistan's relations with the Taliban are poisoned by mistrust, the army will be loathe to sacrifice control as long as Afghanistan's future remains uncertain.

"The question is what the Afghan groups who are currently enjoying the patronage of NATO will do after the withdrawal," said a Pakistani official with experience in Afghanistan. "Are the current crop of Afghan leaders simply going to melt away?"

STRATEGY UNDER FIRE
While Afghan officials portray Pakistan as a recalcitrant partner, Karzai's lack of a coherent strategy may be an even bigger problem.

The Afghan government has focused on luring individual Taliban leaders to abandon the insurgency, rather than laying the groundwork for a more comprehensive peace process that might satisfy the country's many constituencies.

"It's not enough just to bring former Taliban commanders to Kabul," said Haji Mangal Hussain, a former adviser to Karzai. "The most important factor for bringing peace is to improve the quality of the Afghan government."

With Karzai due to step down at elections due by 2014, and his administration steeped in allegations of nepotism, warlordism and corruption, many fear he lacks the legitimacy to serve as guarantor for a viable power-sharing deal.

The Taliban's traditional enemies from northern Afghanistan, who wield considerable power in Kabul, fear Karzai may betray them at the negotiating table and doubt Pakistan will ever abandon its insurgent proxies.

The Taliban is also divided. Mullah Omar, in a message for the Muslim holiday of Eid al-Fitr, assured Afghans on Thursday that he was committed to building an all-inclusive government after foreign forces leave.

Doves in the movement, who doubt their fighters can overrun Kabul, want to start talks now to spare Afghanistan the risk of a new civil war. They risk being drowned out by hardened jihadists who argue that the withdrawal of U.S.-led forces will clear the path to victory.

Against this kaleidoscope of competing factions, Karzai's focus on Baradar has a seductive simplicity. Whether he one day serves as a conduit for talks - or merely as a trophy - will depend largely on the maneuverings of generals, politicians and fighters beyond either man's control.