Monalisa Chinda angry over media reports on this PHOTO 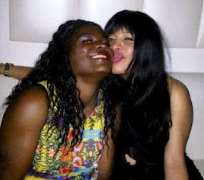 The Nollywood star actress and producer Monalisa Chinda, who was the face of Port Harcourt - Carnival Queen, in her hometown of Rivers State has reacted to the photo above, which many websites and blog-site called her and her very good friend ''Egor Efiok'' lesbians.

They were spotted in a Deuces club in Victoria Island Lagos.

"I don't have time for this kind of rubbish because I am busy. If people feel like they can cook up stories where there is none, then they should go ahead. Imagine this type of nonsense. It was a glorious day for me where we went to celebrate my sister's anniversary. We were all taking pictures in a public place, how does that translate to the rubbish people were saying online? You saw the picture, what do you make of it? I don't have time for this please, I won't be dragged into it at all"

Hmm, na wa oo, how this picture take resemble lesbian picture self? it's normal for ladies to peck on cheek, so why is this different?

Honeymoon Ended The Day After We Were Married.

Between Susan Goldie Harvey And Essence