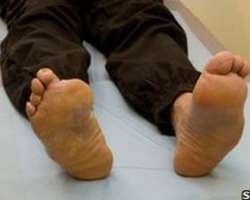 The number of people in England having a limb amputated because of type-two diabetes has risen dramatically, a study has shown.

However the number of amputations in people with type-one diabetes dropped, a Imperial College London team found.

A charity said more early diagnosis was needed, as type-one diabetes could go undetected for more than 10 years.

The number of people diagnosed with type-two diabetes had increased greatly in the past decade, which could partly explain the findings, the researchers said.

In the UK, 2.35 million people have type-two diabetes, which is caused by the body not properly responding to the insulin it produces, and is often a result of lifestyle factors such as obesity.

Along with complications such as heart attacks and strokes, people with diabetes are far more likely to develop foot problems, including ulcers, which can become infected and lead to gangrene.

Writing in the journal Diabetes Research and Clinical Practice, the researchers said the number of the most major amputations, above the ankle joint, had risen by 43%.

And the average age of those having above-ankle amputations fell from 71 to 69 years, which followed the pattern of people being diagnosed younger, they said.

More men underwent amputations than women, a gap that widened during the 10-year period.

Study leader Dr Eszter Vamos said they had expected to see long-term complications of diabetes rising to some extent because the number of people diagnosed with the condition had increased.

"But at the same time there is very strong evidence that with a multidisciplinary team approach you can prevent up to 80% of the amputations.

"It highlights the importance of frequent foot checks and that it is very important to get glycaemic control and blood pressure and cholesterol control."

Diabetes UK care manager Sara Spiers said there were about 100 diabetes-related amputations each week in the UK.

"The findings of this study are especially interesting because they indicate a particular rise in the number of type-two diabetes related amputations," she said.

"This rise could be for a number of reasons, including type-two diabetes not being diagnosed early enough, people not getting the education they need to manage their condition effectively, and swifter treatment of foot problems, meaning people are more likely to have an amputation than die because of foot ulcers."

She added more early diagnosis was needed, as the condition could go undetected for more than 10 years and most people already had complications when they were diagnosed.