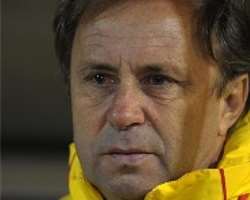 Honours: None
Milovan Rajevac was a surprise appointment for a country that had been promised a world-class manager, but he has made a very positive start to his first international coaching role.

Born in Cajetina in the Socialist Federal Republic of Yugoslavia in 1954, Rajevac spent his playing days as a defender, making appearances for Yugoslavia in the Olympics and reaching the final of the UEFA Cup with Red Star Belgrade in 1979. His coaching career to date has taken in spells in Sweden, Germany, China and Qatar, and he was assistant boss at Red Star Belgrade, where he acted as caretaker for two matches. Most impressively, he turned relegation strugglers FK Vojvodina and FK Borac into UEFA Cup qualifiers.

His appointment as Ghana boss in 2008 was met with scepticism in most quarters. Many 'Black Stars' fans had wanted a homegrown boss, while other foreigners interviewed for the post – including former Rapid Vienna and Austria boss Josef Hickersberger – were unable to agree financial terms. His lack of experience with big clubs or international sides was called into question, but he asked to be judged on results.

Public opinion swiftly turned around. He won four out of four without conceding a goal to seal qualification in a group that featured a Mali side boasting the likes of Frédéric Kanouté, Mahamadou Diarra and Seydou Keita, and he is now considered the most successful boss in the country's history.

Strengths: A strict manager with a reputation as a fine tactician, Rajevac has made Ghana hard to beat and stopped the trend for conceding cheap goals.

Weaknesses: Some feel the results have come at the expense of performances and, while they showed signs of finding some fire-power in qualification, it remains a long-standing concern. Rajevac also brought in a translator due to his poor English language skills.

Career high: While he led FK Vojvodina from last place to third place and was named the best coach in Serbia, his most impressive work was perhaps in leading FK Borac to their highest ever league position and into Europe for the first time. He steered the side through two qualification matches, beating Moldovan side FC Dacia Chisinau and Bulgaria's Lokomotiv Sofia, before departing for Ghana. FK Borac subsequently lost their first-round match against Ajax 6-1 on aggregate.

Career low: His time with FV Progres in Frankfurt ended unfortunately in 1998 when the club went out of business after a series of problems. He may also be resentful that his caretaker spell at Red Star Belgrade ended after two games despite a 100% record.

Tactics: Rajevac is defensive-minded and likes to pack the midfield, with 4-2-3-1, or 4-5-1, the formation of choice. He has at times experimented with more attacking and more defensive line-ups, and even the 4-5-1 tends to look more like a 4-4-2 when they are on the attack, but the emphasis is generally on the centre of the field.

Quotes: “This team is very hungry to go to the finals again. My players are aware of what they can achieve and have the quality to go far. I always believed we would qualify and am very confident about the future.”

Trivia: Rajevac became the third Serbian – and tenth coach – to take charge of the 'Black Stars' in six years, with Milan Zivadinovi taking charge in 2002 and Ratomir Dujkovi from 2004 to 2006.

WC prediction: Despite a midfield that boasts Michael Essien, Sulley Muntari, Stephen Appiah and some solid defenders, they lack strength in depth and a top-class forward. However, NAC Breda striker Matthew Amoah has a good qualification record and, if they can keep things tight, they have every chance of making the quarter-finals.