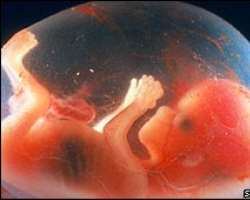 Foetus at 14 weeks
Listen to article

In the UK pregnancy is calculated from the first day of the woman's last period so for as much as three weeks of this first month she might not be actually pregnant.

The fertilized egg begins as a single cell which quickly multiplies to form an embryo as it travels towards the womb. The embryo attaches itself to the womb lining, which is already thickening to support it. For many women the first sign of pregnancy is a missed period in
week five.

Shop-bought tests are considered largely reliable so the mother-to-be does not have to have her pregnancy confirmed by her GP. If a first test is negative a second one a few days later may prove positive as hormone levels in the urine rise.
The embryo is now about the size of a baked bean and its spine and nervous system begin to form.

It already has its own blood system and may be a different blood group from its mother. Blood vessels are forming in what will become the umbilical cord and tiny buds which will become limbs
The baby's heart is beginning to develop by week seven. Around this time many women find they experience the side-effects of early pregnancy including needing to urinate more often nausea and vomiting and feeling a bit weepy and irritable.

All medication including supplements need to be carefully checked as the baby is undergoing vital development in the first 12 weeks. If the woman has not told her GP or community midwife she is pregnant yet, now is a good time to do so.
It is quite common to have a first scan at week eight if the woman has had a previous miscarriage or bleeding. At about this time the embryo officially becomes a foetus.

An early scan is often done through the vagina and is used to check the pregnancy is not ectopic. It should show up the baby's heartbeat. The nervous system is also developing rapidly especially the brain. The head gets bigger and eyes form under the skin of the face. The foetus' limbs are growing and look more like arms and legs. All internal organs are developing and becoming more complex.

Women who may be at higher risk of passing on sickle cell anaemia and thalassaemia should be offered a blood test before 10 weeks.
These conditions are rare but serious inherited blood disorders. They are more common in people of certain ethnic backgrounds including African, Caribbean and some Asian and Mediterranean communities. If the mother is found to carry the gene for either condition, the father is offered a test. If both parents are found to be carriers then they are offered the option of testing the foetus in the womb.

A scan at 10-13 weeks is recommended to estimate when the baby is due and to check whether there is more than one baby. This scan may also be part of a screening test for Down's syndrome.

Testing for Down's Syndrome can take place between now and 13 weeks.
The nuchal translucency scan is used to measure the amount of fluid under the skin at the back of the baby's neck. If it is increased this raises the risk of Down's syndrome. A blood test is taken at the same time which measures two hormones in the blood. The combined results of both tests will be used to give the mother a statistical guide to her chances of having a baby with Down's Syndrome.
The umbilical cord is fully formed providing nourishment and removing waste products. The foetus looks fully human now.

By week 12 the threat of miscarriage is much reduced. By now the foetus is fully formed and many women announce their pregnancy to friends and colleagues.

The foetus is growing in length much more quickly, by now it is about eight cm long and weighs about 60 grams. The placenta is also well formed though it's not yet doing its full job it takes over fully in week 14. The mother is likely to have her first scan this week.
The woman's uterus is becoming larger and is starting to rise out of the pelvis and the pregnancy is probably beginning to show. The foetus can move its head quite easily although the mother may not feel any movement yet.

Week 14 is one third of the way through. The average pregnancy lasts 266 days or 280 days from the first day of last period.
If screening for Downs syndrome wasn't carried out earlier, it is offered about week 15. A simple blood test is carried out first then further tests may be offered.

On the basis of the blood test results the woman may opt for a Chorionic Villus sample or an amniocentesis which would diagnose Down's syndrome or other chromosomal abnormalities. However these diagnostic tests have a small risk of subsequent miscarriage. An alternative to blood tests is a nuchal translucency scans a new scan offered by some larger hospitals. But again an amniocentisis would be required for firm diagnosis.
The foetus has toe and finger nails eyebrows and eyelashes by week

16. It is also covered with very fine, downy hair, called lanugo.
This hair probably serves as some form of insulation and protection for the skin and it disappears before birth or shortly after.
Most women who've been suffering from morning sickness are usually feeling better by now.

In week 17 the foetus can hear noises from the outside world.
By this stage the mother is visibly pregnant and the uterus is rising.

Ultrasound scan or anomaly scan to check the physical development of the baby is made during weeks 18-20. The scan can show the foetus in fine detail and often reveal if the baby is a boy or a girl. However not all hospitals offer to tell parents the sex of the child - and not all parents want to know.

By this stage the foetus is moving around a lot - probably enough to be felt.