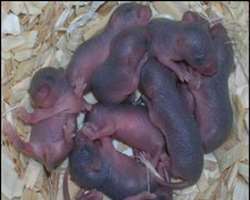 Mice that are abandoned
Listen to article

A study in mice has hinted at the impact that early life trauma and stress can have on genes, and how they can result in behavioural problems.

Scientists described the long-term effects of stress on baby mice in the journal Nature Neuroscience.

Stressed mice produced hormones that "changed" their genes, affecting their behaviour throughout their lives.

This work could provide clues to how stress and trauma in early life can lead to later problems.

The study was led by Christopher Murgatroyd, a scientist from the Max Planck Institute of Psychiatry in Munich, Germany.

He told BBC News that this study went into "molecular detail" - showing exactly how stressful experiences in early life could "programme" long-term behaviour.

To do this, the researchers had to cause stress to newborn mouse pups and monitor how their experiences affected them throughout their lives.

"We separated the pups from their mothers for three hours each day for ten days," Dr Murgatroyd explained.

"It was a very mild stress and the animals were not affected at a nutritional level, but they would [have felt] abandoned."

The team found that mice that had been "abandoned" during their early lives were then less able to cope with stressful situations throughout their lives.

The stressed mice also had poorer memories.
Programming genes
Dr Murgatroyd explained that these effects were caused by "epigenetic changes", where the early stressful experience actually changed the DNA of some of the animals' genes.

"This is a two-step mechanism," Dr Murgatroyd explained.

When the baby mice were stressed, they produced high levels of stress hormones.

These hormones "tweak" the DNA of a gene that codes for a specific stress hormone - vasopressin.

"This leaves a permanent mark at the vasopressin gene," said Dr Murgatroyd. "It is then programmed to produce high levels [of the hormone] later on in life."

The researchers were able to show that vasopressin was behind the behavioural and memory problems. When the adult mice were given a drug that blocked the effects of the hormone, their behaviour returned to normal.

This work was carried out in mice, but scientists are also investigating how childhood trauma in humans can lead to problems such as depression.

Professor Hans Reul, a neuroscientist from the University of Bristol, UK, said that this was "a very valuable addition to the body of work on the long-term effects of early-life stress".

"There is strong evidence that adversities such as abuse and neglect during infancy contribute to the development of psychiatric diseases such as depression," he told BBC News.

"This underscores the importance of the study of epigenetic mechanisms in stress-related disorders."