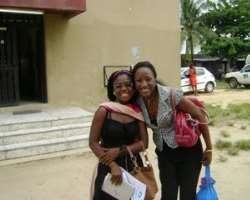 Fun, excitement and trauma best describe my first trip to Anago land. Even as I did all my preparations for the trip, I decided to keep a low profile despite the intense excitement I felt. I have learnt my lesson; virtually all my trips had in the past been cancelled due to one reason or the other. I was afraid to get all excited about this trip only to later tell people I did not go, if it turned out to be another cancelled one.

So, I went about my normal duties while getting ready for the trip. I even remember feeling somehow funny about the trip … premonitions? I do not know. So I told a few colleagues that I was not particularly thrilled about the trip after all.

Well, May 13, a Wednesday, the D-day for the trip came and we had to leave. By 6: 55pm (7:55pm, Nigerian time), we were there, at the Murtala Mohammed International Airport in Lagos. Then the fun, or maybe the trauma begun.

“Hey ladies and gentlemen, where are your vaccination cards? Those with it should come this way and those without it should go stand the other way” said the immigration officer at the Murtala Airport. Some of us pretended to be frantically searching through our bags for the non-existent cards. The officer looked sternly at us and said we were going to be deported back to Accra if we did not provide our cards!

“But sir, we were not told to carry our cards along” said one of the damsels who found herself in the terrible situation. “Must you be reminded to take care of your health? The security officer who seemed to be enjoying the whole scenario retorted, quite angrily.

Finally we were allowed to go through the process after a fair taste of the “I be the Oga here” ordeal. We were rushed through the immigration process and immediately we got out, a different set of officials readily met us with a unique approach to their business. They were very aggressive and dynamic! While we waited for our driver to take us to our guest house, these officials came at us and insisted they helped us with our luggage even within the shortest distance… such benevolence! They did it with so much skill and aggression, you had to be really strong not to yield. They virtually carried your luggage before you could say Jack. This be Naija!

We had a good night sleep and woke up to see the bright sun on Thursday … a thrilling Thursday, I called it. There was an interview on Silverbird TV Morning Show, where I was forced to be on air together with Lydia and Naa (Perfect Picture stars). I was damn nervous! Iretiola, the pretty hostess, did a good job. She made me relaxed and everything went well. Lunch and a boat ride at the Boat Club was fun and thrilling. What could have been better than lunch and interactions with a minister of state and top-notch business executives in such friendly atmosphere?

Evening came and the Silverbird Galleria was all glamour and sophistication amidst fun and cheer. Meeting Nollywood stars such as Stephanie Okereke and Zack Orjih was just a dream come true. In the cinema, I couldn't be happier as I witnessed the audience (largely Nollywood stars, first rate movie makers, movie lovers and business executives) clapping and laughing as the hilarious scenes of the Perfect Picture unfolded. It was a perfect night.

Then came the peak of my excitement; the fun ride with Mr. Edward Boateng (my boss), his friends and the stars of the “Perfect Picture” in the flashy limousine to the Eko Hotel. Amidst plenty of laughter and fun, Edward and Anthony one of his friends, shared with us how they met and their success stories.

Eko was a paradise on earth. The ambiance, the rooms, and oh my God, the bar! The Sky Bar! We had so much fun over there, I just don't know how to describe the atmosphere, the mood or the feeling (these terms remind me of my literature teachers). Champagne and other exotic drinks were in abundance. You just couldn't have the stamina to take whatever drinks you wanted.

To bed, to bed, to bed! No, this was not Lady Mcbeth. We departed to our rooms at about 3 o'clock am. When I got to room 329, my little paradise, I took a shower, packed my stuff and did everything I needed done to be ready for our flight in the next two and a half hours. It was about 3: 46am when I had finished with my preparations. I tried to resist the inviting bed. I set my alarm to 4: 45am anyway, in case I fell asleep. I didn't have to sleep, I told myself, but didn't I? Well, I didn't know what happened next until I suddenly jumped out of my bed upon hearing the intercom.

“All the others are gone, you've been left behind, Brooke” came a familiar voice which later turned out to be Albert's, my colleague.

Then the trauma started. I understood my boss and everyone else was so worried and angry with me. They did everything possible to wake me up, but I wouldn't hear. “We even thought you had committed suicide” Albert jokingly told me. When I called my office in Accra to let them know I was fine, my colleague whom I spoke to didn't make me feel any better. In fact she only made worse my apprehension. I felt I had put the whole team and office on fire! I felt so bad and worried for causing everyone so much anguish and worry. I couldn't even eat. Suddenly, my 3 days in Nigeria seemed 3,000 unpleasant days! All the fun I had had just vanished and I started thinking seriously about how to explain to my boss and the others what actually happened.

“We banged on your door, called the loud irritating room phone several times, but you wouldn't wake up. Your neighbours were even mad at us for making so much noise” I was told.

“Everyone concluded you were not in the room”; “You went out to see a guy”;

“An Alhaji came for you”;
“Only you, knew what you were doing in the room”; “You pulled a fast one on us, Brooke”

These and many more were the interpretations people gave to my predicament. Oh my God! You should have seen me, worried Brooke. When I finally managed to come back safely with a colleague on the 5:30pm flight, it was such a delight to be home. Now I'll deal with the other issues as they come, I assured myself. Thanks to Vivek, Albert Nana Kwame and Gisela. But for them, I just do not know what could have happened to me in those traumatic moments.

Then came Monday when I found myself in the office. Everyone came to me and told me how worried they were … some of them obviously teasing. I tried to explain to them, hoping that they believed me. My boss was not so angry after all, he was happy to see me back safe and sound. He however admonished me to be more careful next time. I'm very grateful and will surely be on guard the next time… so I don't end up with titles like Hajia Olubofun.