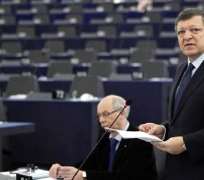 Germany told Italians on Wednesday they must accept Prime Minister Mario Monti's tough economic measures to avoid becoming the next victim of the euro zone debt crisis after a bailout for Spain's banks failed to calm markets.

"If Italy continues along Monti's path there will be no risks," German Finance Minister Wolfgang Schaeuble said in an interview with La Stampa daily when asked whether Rome was next in the markets' firing line.

Highlighting that peril, the euro zone's third biggest economy had to pay nearly 4 percent to sell one-year treasury bills at auction on Wednesday, a six-month high, due to fears about its ability to keep servicing its debt mountain.

Italy's 1.9 trillion euro ($2.4 trillion) public debt is equivalent to 120 percent of gross domestic product, a ratio second only to Greece. A month ago, Rome had paid just 2.34 percent on one-year paper.

Schaeuble said Italy had made huge progress under Monti's government of technocrats, which has taken austerity measures and launched pension and labor market reforms since replacing Silvio Berlusconi's scandal-plagued administration in November.

"This is acknowledged everywhere in Europe and by the markets," the German minister said. "I can only hope that political forces in the Italian parliament and public opinion continue to decisively back him, because the road towards a return to sustainable growth through structural reforms, improved competitiveness and a lower deficit is the right one."

Monti, whose popularity has slumped after an initial honeymoon, met the leaders of the parties backing him in parliament on Tuesday and urged them to give their unified support to help Italy through market turmoil.

In a statement, he said he was "worried by the situation of emergency" on financial markets, and had told the party chiefs that "cohesion" was needed "to overcome the critical situation and give an image of unity abroad".

Markets calmed slightly on Wednesday due to expectations of further euro zone policy action to tackle the debt crisis, but investors remain wary ahead of a general election in Greece on Sunday that could lead to the country leaving the euro area.

STRONGER INTEGRATION
Greek banks have seen a marked increase in the pace of deposit withdrawals as a June 17 election, the second in two months, nears and fears grow that Athens could be forced out of the euro, senior bankers said.

Combined daily deposit outflows from the major Greek banks have reached 500-800 million euros over the past few days, with the pace picking up as the election draws closer and rising noticeably on Tuesday, two bankers said.

EU officials have hinted that they would be willing to consider giving Greece more time to achieve its fiscal targets, easing the pace of austerity, provided a new government accepted the main conditions of its international assistance programme.

The possibility of a victory for radical leftists who have vowed to tear up Athens' EU/IMF bailout memorandum has driven neighboring Cyprus to the brink due to its banks' heavy exposure to Greece.

The country's central bank governor said on Wednesday Cyprus was seeking the best terms for any bailout it might apply for and had other options than an EU-led rescue, an apparent reference to the possibility of seeking help from Russia and China. He declined to comment on the timing.

"If we eventually apply, because it is not a given that we will apply (and) there are also other options, we will seek the best terms for the economy," Panicos Dimitriades told reporters.

European Union leaders plan to call for much stronger banking and fiscal integration and enhanced governance in the euro zone at a summit later this month, but draft conclusions obtained by Reuters left the details vague.

"Recent developments have demonstrated the need to take the EMU (Economic and Monetary Union) to a further stage," said the draft due to be discussed by EU ambassadors on Thursday.

"The new stage will build on deeper policy integration and coordination. There is a need for more specific building blocks centered around a much stronger banking and fiscal integration, underpinned by enhanced euro governance," it said.

The document said leaders of the 17-member currency area would hold a separate meeting right after the 27-nation EU summit to discuss a timetable for those reforms.

Spanish Prime Minister Mariano Rajoy, speaking in Madrid, said that while each country had to take its own measures to clean up public finances and reform the economy, only closer European integration could solve the crisis.

"This situation can only be fixed by doing what must be done at home and with much more Europe and much more integration," the Spanish leader said. "The most urgent thing is that there should be more clarity on the euro zone."

Addressing parliament in Rome on Wednesday, Monti said the European Union needed a growth plan including greater investment and eventually joint euro bonds to stem the spread of the crisis. He was to take that message to Berlin later in the day, where he will meet Chancellor Angela Merkel.

Spanish 10-year bond yields fell slightly after hitting a euro lifetime record of 6.86 percent on Tuesday, as investors weighed the risk that the Spanish state may eventually need a full bailout if the bank rescue fails to stop the rot.

Germany's Schaeuble sought to quash such talk, telling La Stampa: "Spain too is on the right path. It does not need an aid programme. It has a specific problem with its banking sector and I am sure it will solve it."

Market nerves over the worsening euro zone crisis are also beginning to affect Germany, which has so far seen its borrowing costs fall to negative levels in real terms because it has been seen as a safe haven.