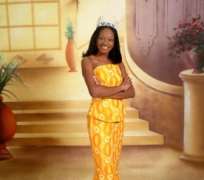 And so Awushie wept and wept. She could hardly make out her way through the gates into her parents home as she was blinded with her own tears …. tears of shame and regrets.

The huge crowd gathered around the gate of Mr. and Mrs. Agboka were amazed to see the ever charming beauty in such a state. With her head buried in shame, she was rushed angrily through her parents' home.

Awushie, Miss Mondo as she was popularly called by her peers and admirers was the epitome of glamour. She was what most young ladies who knew her on the silver screens or were lucky enough to have met her in person wished to be.

She had all the great and flamboyant friends. She attended all the important social functions. She was a regular guest at the top restaurants in town. She was among the first to be seen in the latest runway clothes. She was so spotlessly dressed she passed for an elegant model in the Vogue Magazine.

Behind the glamour however, was a different Awushie. Awushie was too gorgeous for the kitchen. Her delicate skin couldn't be flawed with her engagements with kitchen chores. Her mother made sure food was always on the table for the queen. After all, there are more than enough house helps who needed some work to do to make them deserving of the big allowance they received from the Agbokas every month. The least they could do was to prepare sumptuous meals and serve pretty Awushie breakfast in bed if she so wished.

Mr. Agboka often complained about such an up-bringing and said that it did more harm than good to their daughter. She must learn how to do simple things like cooking. Every woman (even men of today) needs that. Mrs. Agboka wouldn't hear of any such thing that offended her daughter.

It turned out that Awushie grew up, well polished and highly networked. She married a very wealthy business mogul in a grand wedding ceremony that remained the talk-of-town for weeks.

To Awushie, the wedding was a dream-come-true. Getting married to an affluent man guaranteed the fulfillment of the fairy-tale world of living happily ever after.

And so Awushie began her married life after the alluring wedding and fascinating honeymoon, spent all the way in the Bahamas. Mr. Anyomi was prepared to dish out any amount of money for his new bride …. Awushie, every man's dream for a life partner.

After sometime of visiting all the classy restaurants or returning home for a microwaved food on the table, Mr. Anyomi, the troubled husband asked when he would ever get the honour of tasting some real food made from his beauty queen's magic fingers.

Mr. Anyomi couldn't take it anymore, and so he started complaining. Awushie only retorted angrily that she was not married to become a cook. “After all, we have all the money in the world to hire the services of the best cook in Paris” she said.

“So what happens to the joy that comes with finger-licking and the relishing experience that comes with eating a special meal prepared by one's wife? Are we going to go on like this forever?” Mr. Anyomi wondered.

Without seeing any attempts on Awushie's part to make things better, Mr. Anyomi decided that enough was enough. He couldn't afford to have a beautiful woman for a wife and yet keep hopping from restaurant to restaurant for the rest of his life. He longed for home food made by his wife and no one else.

And so things got out of hand and Mr. Anyomi decided to do the worst. “I must take her to her parents …. She needs some proper grooming” he said angrily.

As her husband angrily pulled her out of the car and threw her luggage at her in front of inquisitive on-lookers who had gathered at her parents' gates, Awushie suddenly remembered something her dad and aunt used to tell her while she stayed in her bedroom and enjoyed room service.

She thought about it suddenly (Tugbe me yina atsufe oooo …. Ahoofe nkor aware3) …. Awushie, her aunt would say, “you need to learn these things, no matter how beautiful, intelligent or powerful a woman is, she needs to equip herself with home-making skills”. You may disagree with my grandma and say this perception is archaic, but which would you rather go for, a beautiful woman who can also make a home or the one who is beautiful but lazy. I bet you would die the former.