Want to put on artificial nails? 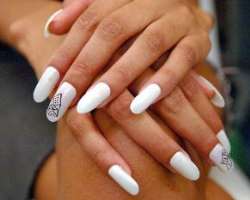 Putting on artificial nails is neither painful nor difficult.
Listen to article

Do you have a desire to flaunt long and beautifully coloured nails despite possessing weak and brittle nails? If yes, then the answer is simple as these days many artificially put on nails are available which can allow a woman to flaunt whichever style suits her mood the most.

This activity of putting on fake and artificial nails is gaining prominence in today's industry as it provides a simple remedy for those girls who have short defected or weak nails. The easy availability of such nails along with their easy and simple application has made them a latest fashion craze among young girls in particular.

After taking care of the trimming and filing of one's natural nails, one should apply nail glue directly on the fingernails. After that, take the artificial nail by its tip and hold it down on the top of the nail glue along with exerting pressure for at least two minutes so that it holds on to the nail. Once the artificial nails are applied, one can cut them and colour them according to one's desire.

Application of fake or artificial nails is the best option for ladies who do not have the luck of possessing naturally beautiful nails. Moreover, such nails provide the luxury of flaunting brightly coloured and polished nails which look more or less natural.