How Does A Waterfall Begin? 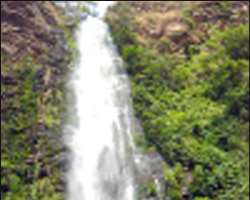 If, as it flows along its course, a river meets a sudden change in the level of the earth, the water has to make a 'jump' and falls with force to the earth below, making a waterfall.

Sometimes different levels are caused by the gradual erosion by the river itself.

If the water meets a section of soft rock, the water will gradually eat this soft rock away, creating a slope which is always a little bit higher.

This happens only in the mountains where the water level, flowing strongly and rapidly, erodes the rock with some force. The water which falls from high up, together with the debris, digs a wide, deep hole at the base of the waterfall.

The highest waterfall in the world is Angel Falls in Venezuela 972m, more than three times the height of the Eiffel tower.

The widest waterfall is the Khone Falls in Laos, Asia which extends 11km and reaches heights of between 15 and 20m high.

Credit : The Big Book of Knowledge.