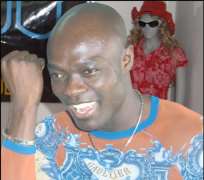 THREE OFFICERS of the German Consulate yesterday stormed an Accra Fast Track High Court to have a word with Sima Ibrahim, a Ghanaian born German national. Sima Ibrahim, the boss of Exopa Modeling Agency, is standing trial for alleged attempting to export cocaine to Germany.

The officers, three in number, arrived just before the case was called and stood in the courtroom to observe proceedings.

The case was however adjourned due to power outage at the court, which meant the trial could not be recorded.

Prison officers escorting Sima reportedly refused to allow the Germans access to the accused person saying they had not received a formal order directing them to give the officers an opportunity to have a word with their citizen.

Counsel for the accused person Mr. Kwame Akuffo, drew the attention of the trial judge, Justice Charles Quist, to the fact that the Consulate had sent representatives to see their national, but the prison officers were not willing to allow them to do so.

When the judge enquired about why they were denied access, the head of the prison officers said the consulate has to apply to the Prisons Service and book an appointment to see Sima.

The judge however intervened ordering the prison officers to allow the representatives of the consulate access to Sima. After the case was adjourned, he was escorted out of the courtroom to see the officers.

The case has been adjourned to October 7 2009 at the request of the Chief State Attorney, Mr. George Ofori, who said investigators needed two more weeks to conclude their findings as fresh evidence had emerged in the case.

However Mr. Akuffo expressed his willingness to be in court the next day by which time he believed there would be light. He accused the prosecution of always buying time with excuses, but the judge went ahead and adjourned the case for two weeks.

The case of Abena Serwah and Joanne Gabrielle, the girls busted at the Kotoka International Airport (KIA) with pellets of cocaine allegedly stuffed in their private parts, has been adjourned to October 8, 2009.

They were arrested along with a male colleague Shadrack Ntiamoah, who had also hidden cocaine in his canvass.

Serwah, 19, Gabrielle, 21, both students, and Shadrack Ntiamoah 23, a fire officer, are all American nationals. They pleaded not guilty to attempted exportation of narcotics and possession of narcotic drugs without license.

Gabrielle, who had earlier told the court she would not have her plea taken because her lawyer was not in court, yesterday pleaded not guilty to the  offence in the presence of her lawyer Mr. Adjei Lartey.

The Chief State Attorney, Mr. George Kwadwo Ofori, who presented the facts of the case, told the court presided over by Justice Charles Quist that the accused persons are American citizens of Ghanaian parentage and are based in The Bronx, New York.

He explained that on September 9 2009, the accused persons arrived at KIA to board a Delta Airlines flight to the United States of America.

As they went through boarding formalities, security officers suspected them of carrying narcotic substances and subjected them to a thorough search during which it was detected that each of the students had 19 oval shaped pellets of whitish substance, suspected to be cocaine, lodged in their private parts while the fire officer had also put the substance in a canvass shoe he was wearing.