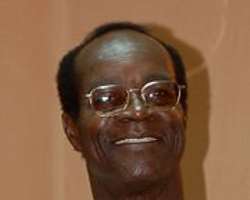 George Ayittey is a prominent Ghanaian economist, Author and president of the Free Africa Foundation in Washington DC.

George Ayittey is a prominent Ghanaian economist, author and president of the Free Africa Foundation in Washington DC. He is a professor at American University and an associate scholar at the Foreign Policy Research Institute. He has championed the argument that “Africa is poor because she is not free”, that the primary cause of African poverty is less a result of the oppression and mismanagement by colonial powers, but rather a result of modern oppressive native autocrats. He also goes beyond criticism to advocate for specific ways to address the abuses of the past and present; specifically he calls for democratic government, debt reexamination, modernized infrastructure, free market economics, and free trade to promote development.

His books include Africa Unchained: the blueprint for development, Africa in Chaos, The Blue Print of Ghana's Economic Recovery and Africa Betrayed.