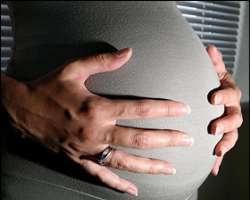 A WOMAN is soon to deliver a record-breaking 12 BABIES, it was claimed today. The teacher is expecting six boys and six girls, according to reports.

She conceived the tots following fertility treatment, after suffering a number of miscarriages.

The mum - who has not yet been named - reportedly told doctors she was "feeling fine and looking forward to hugging her six boys and six girls".

She is said to be in 'good health' but subject to constant medical monitoring.

The father, named in local reports only as Marwan, said: "In the beginning, we thought that my wife would give birth to twins, but more foetuses were discovered. Our joy increased with the growing number."

He claimed she wanted to give birth naturally, but medical experts claimed this would be impossible.

The Tunisian health and social ministries have said they will offer various forms of assistance to the family.

"The woman could have been receiving ovulation induction treatment, which stimulates egg production. You don't have the same control as with IVF."

In January Nadya Suleman of California, US, stunned the world by delivering eight healthy tots.

And in May, Nuala Conway, 26, from Dunamore in Co Tyrone, gave birth to sextuplets - four girls and two boys. One of the girls died in July.