The Moon, Mars and Beyond - Ghana in space? 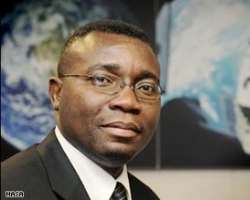 The moon, Mars and beyond: All are in the sights of Dr. Ave Kludze.
Listen to article

He was not able to fulfil his childhood dream of being a pilot, but Ghanaian scientist Dr. Ave Kludze has arguably gone one better: developing and flying spacecrafts for NASA. The 43-year-old didn't enter orbit when controlling a NASA rocket to launch the Calipso environmental satellite in 2006, instead piloting it from the control center on the ground.

Nevertheless from growing up in Ghana to being an astronautical engineer and strategist for NASA, he has had a similarly stratospheric rise to the top. You can hear Ave Kludze's story on African Voices this weekend on Saturday at 13.30 and 20.30 CAT and on Sunday at 19.00 CAT. http://edition.cnn.com/2009/WORLD/africa/08/03/ave.kludze.NASA/index.html

Kludze was always fascinated by science and how things worked. "I was a very curious kid and I always questioned lots of things, and most of my friends I grew up with, they knew that. And my parents, they were a little bit concerned because sometimes I would take apart a lot of things they would not want me to touch," he told CNN.

When he realized he could not become a pilot because of his eyesight he channeled his energies into studying engineering, moving to the U.S. to complete a course in electrical engineering at Rutgers University. On graduating Kludze initially planned to return to Ghana to develop solar technologies, but then NASA came calling in 1995.

"I never did dream of working for NASA. I admired what they did, but it never did cross my mind. I did not see how a kid like me could work for NASA," he said.


He commanded his first spacecraft from NASA's Goddard Space Flight Center and has gone on to develop an extra-vehicular infra-red camera as well as other projects for the space agency. While he didn't return to Ghana as he originally planned, he still believes that his work -- and NASA's -- has had some benefits to his native country and more down-to-earth lives.


"Well, NASA has done a lot for Africans. Maybe Africans they don't know that. They have cell phones, glasses, anti-scratch and all those things. We have portable water system that NASA has developed for Africa. They're using it," he said. "And one thing people often forget, NASA doesn't only develop space technology, we also develop aeronautical technology. So when the planes they fly and other flying objects, NASA's technology has been involved in that."


Kludze is also keen to pass on the message that for young Africans, the sky is the limit in terms of what they do with their lives. "I've learned that being given the freedom to think and think openly helps bring in new ideas. So in community, like in an African communities, I think younger generations and both the old and the young should freely share ideas and break those old barriers. "So I believe that with some determination and some hard work most of the younger generation can get whatever they want to. They can even go into space, they can do anything."