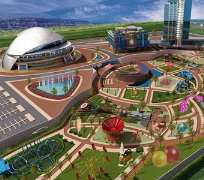 UYO, May 22, (THEWILL) - Akwa Ibom State House of Assembly has granted Governor Godswill Akpabio permission to obtain a loan facility of N50 billion needed for the completion of projects in the state, provided the refund will be made before the expiration of his term in office.

Governor Akpabio had approached the House to obtain approval for the executive to obtain a loan of N50billion for the purpose of completing some projects in the state including, the Ibom Tropicana Complex, the Olympic Stadium, the second runway at the Ibom International Airport and roads still under construction.

Speaker of the House, Mr. Samuel Ikon said the legislators were satisfied with the explanation given by the Commissioner of Finance, Mr. Bassey Albert, that the loan would be judiciously used by the executive.

Hon. Ikon said the Assembly was equally satisfied with the assurance from the finance commissioner that the repayment period for the loan would not exceed the tenure of the present state administration.

Announcing the approval of the request, Ikon directed the clerk of the House, Mrs. Mandu Umoren to communicate the resolution to Akpabio within 24 hours.

Members who contributed to the request said that since the loan is good-intentioned and the period for its refund already specified, releasing it for the completion of ongoing projects is a good idea.

“The purpose for which this loan is sought is genuine and we all must support it so that we do not have abandoned projects,” Ekong Sampson, the member representing Mkpat Enin, said,

Meanwhile, a bill for a law to establish contributory pension’s scheme for all employees of Akwa Ibom has passed its second reading.

The contributory pension bill, when passed into law, will enable government to set up machinery to regularise the pension in the state.

Recalling that the bill, which was passed by the 4th Assembly, was not assented to by the governor before the expiration of that Assembly, the speaker forwarded it to the House Committee on Labour and Productivity, headed by Mr Ayang Akanimo, representing Eket state constituency, for further action and delivery of report within two weeks.