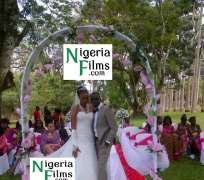 Not long ago, GH hosted a secret celeb wedding between Eugene Baah of Praye fame (choirmaster) and actress Bevelyne Afaglo sent tongue wagging in the showbiz industry. Just last week, we were honoured with an invitation to witness another secret wedding ceremony of Chris Attoh and elegant Yvonne Nelson at the Aburi gardens. Indeed, the set up and props could change the mindset of even a catholic priest to have a spectacular wedding as such.

Nadia Buari, Eddie Watson, Anita Erskine, Tana from Nollywood and fame director Pascal Amafo were some of the celebrities that were presents at the colourful wedding ceremony. And for the very first time, the bride arrived on time, gracing the occasion with the bridal keyboard tunes in an immaculate dress. Paparazzi were also alert as Yvonne walks to her will-be husband and took her seat besides him.

One couldn't have believed that the occasion was actually a scene in a movie as invitations were given to the biological parents of the various actors, making the whole thing look real. As we were getting soaked in the matrimonial ceremony, songstress Efya stormed onto the set and ruined the ceremony with what seemed like a real day norm until we heard “Cut” from Pascal Amafo. Indeed, every musician is an actor; as Efya took it on as if she's being acting all her life.

Sources say the production is a collaboration of Yvonne Nelson and Media GH.