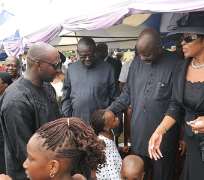 In a condolence speech at the funeral service in honour of the deceased at the Assembly Quarters, conducted by The Living Faith Church (Winners Chapel) in Calabar, Imoke lamented that Mrs. Ephraim passed on in her prime, when her exceptional endowments and abilities were most needed in the service of her fatherland.

Regretting that Honourable Ephraim had lost a trusted confidant, faithful friend and loving companion, he said he received the sad news with utmost grief and a profound sense of loss.

“Her exit has certainly robbed you and the rest of the family of her priceless friendship and love, which has over the years endeared her to all,” he said. “Her exit after decades of service and support to the family and the community at large will certainly leave a great void.”

Imoke urged Hon Ephraim to be consoled by the exemplarily life that his late wife lived, and the indelible marks she left. He urged the widower to draw strength from her inspiring works in the service of God and humanity.

In his exhortation, associate pastor, Winners Chapel, Calabar, Mr. Takim Asu Ojuo described death as the final end of man on earth but noted that there is hope for those who truly trust in the Lord Jesus Christ for life everlasting.

He called on the congregation to re-examine their lives, living as one on earth, and re-dedicating themselves to the service of the Lord, adding that no man will make heaven except the person is born again.