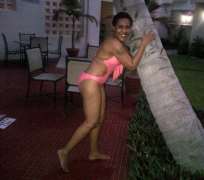 When success and successful actors' stories are written in the annals of Nollywood, Shan George's name cannot be overlooked. Gorgeous and gifted, Shan, who broke into the movie world in the 1997 soap opera, Wind of Destiny, not only conquered Nollywood, she captivated her fans with blistering and daring acting that wowed the Nigerian audience so much so that her memory continues to linger in the minds of Nollywood fans.

The single mother of two shares her story. After two failed marriages, will she dare think of another try? “I believe there are still good men out there... I am sure I will meet a good man out there someday,” she avows.

She also recounts how a near-tragic experience that almost turned her to a cripple turned around her life. We present the riveting interview raw and uncut.

So why didn't we hear about you being bedridden?

That is because it is not everything you would want to tell the press. It is easy to talk about it now because I am fine now, but back then on the hospital bed I wasn't in the mood to throw a pity party. I was rather trying to calm down to adjust to being a cripple if it were to result to that. I fell in my bath tub and I hit my back on the edge and passed out, by the time I woke up, I discovered I was not able to walk. I really want to say thank you to people like Daddy Showkey, and others who really stood by me during that trying period.

Considering the fact that you married early, at about 15, would you advise anybody to marry early?

I wouldn't. The truth of the matter is that when you are given out for marrige, at a very young age, there is a lot of psycohological damage it does to you. First of all, you are so immature, and immaturity as we know causes a lot of lapses in anything we do, either your job, your school or in your relationship with the opposite sex, like in marriage. Immaturity goes a long way to do a lot of damage because your reasoning is feeble, and when your reasoning is feeble, your actions will be feeble. I don't think I will advise anybody to get married at a tender age as I did.

Was that the reason your first marriage failed?

Do you know how old my first son is? I have two sons from this marriage you are talking about, a 24-year-old boy, who is a graduate of Economics from the University of East London, since last year. The second one is in the same school, reading music, whose song, “Egbami” has got everybody talking. I don't want to sit here and talk about marriage that happened 26 years ago, it is ridiculous to do that. People already know this about me, so I don't want to talk about it anymore.

You were already mature by the time you went into your second marriage, why did you walk out of it?

I did not walk out of it; my husband left me for someone else. There are a lot of women their husbands leave for someone else, I don't think I am the only one. I married as an aldult to a man that I saw and liked, and believed in my mind that I had seen someone I want to be with. I spent four years of my life with him and the person decided to walk out, and move on with another woman, I don't think I should be carrying matchet pursing people for that. He found another woman and decided to move on with his life.

Don't you think there must be a reason he left you for another woman?

If a chance of reconciliation emerges, will you give it a thought?

I will probably have to think about it before I will give you an answer to that question because you just asked a question that I am not prepared for. I never thought about this before.

How does it feel having such grown up boys as sons when you are still young and good looking?

That is why I don't like saying I regret this or I regret that. They are the reason I am not angry at the marriage. How can I be angry when I have such beautiful children? I have friends and colleagues who are my age mate who are not married and have no child, and those ones are the biggest bad bele that I have; just look at me, Shan George, a package of blessings. That is why I don't like coming out to talk, you say this, then I would come out and I say it's a lie; no, I don't have time for that. Ninety percent of the 'bad beles that say Shan George is this, Shan George is that, are far below me; I look at them, all I feel for them is pity, because I am far ahead of them. I am so blessed and it is not my fault. That is why I don't get angry at what I hear about me.

Having been disappointed in marriage twice, would you still give marriage a chance?

I think so; I think there are still good men despite what we women say about men being this or that. I have seen a lot of men staying married to their wives and becoming good husband to their wives and good fathers to their children. So I think there are a lot of good men, out there, women should not because of what happened in a particular affair keep judging men as being all bad. If you had a relationship and it did not go down well, don't use that to spoil the next one. So I am sure I will meet a good man out there someday.There should be a lot waiting for your yes or no-I have not seen a man yet, that is just the truth.

So you are searching?

Well, I may not really be searching. I am not a 29-year-old girl or a 25-year-old girl anymore. There are things that actually put pressure on women to start searching. But I am not in that situation. I know there will be a good man someday; a good man will come around some day.

I grew up in the village and I would say it was fun. One of the advantages later was that I had village sense and I later got “city sense”, then it became double sense (laughter). And I have imbibed a lot of my traditions, one of which is that of respect for elders.

Your affair with Okey Bakassi, many thought it was going to lead to marriage?

I won't talk about it. Seriously, this is a relationship that happened like 10 years ago.

Apart from the God factor, what else do you think helped you get so much success, in this movie industry?

It's hard work, because the Bible says He will bless the work of our hands. Whatever you are doing, if you are selling akara, sell it well. Have you not seen people training their children with money they make out of selling akara? So do your own and allow the person to do his own. Anybody that has never come to you to beg you for what to eat, you don't even have the moral justification to judge that person. I was talking to somebody yesterday, who is just two years old in the industry, and she came crying that they wrote something false about her. I told her: you have not started at all. When you are busy doing your own thing and you are successful, people must talk. But you can't bring a good man down.

It seems you have developed a thick skin you are no longer perturbed about what people say or write about you?

If you got married at the age I got married, and you lived in the kind of home I lived in, all those years, came out from that home, and grew up on the street, like I did, I don't think there is anything the press want to write that would shake you. There are many married women in this industry that still sleep around like dogs and nobody is talking about them. Most of them are just using the umbrella [of marriage] to cover their 'shits'. I married twice, yes, but go and ask whether I was ever caught with another man by my husbands. Never! I didn't leave any of my husbands because I was wayward.

Are you not threatened by the fact that younger faces are taking over the industry?

Olu Jacobs is still acting, and you can't compare him with Desmond Elliot…that is all I have to say.

Can you remember your most embarrassing moment?

I think it was when I did a movie where I played a character that lured her friend to the village, killed her and returned to the city to date my friend's boyfriend. After that movie I went to the market and women were insulting me, throwing tomatoes at me and I was so embarrassed that day.

People say Nollywood marriages don't last; what do you think is the problem?

Marriages don't last these days, not just Nollywood, and I don't know why, only God knows.

How would you advice an up and coming actress?

I will just advice them first of all to get an education, it is very important, and they should put God first.

2Face's Secret Marriage With Annie: It Is Not True--Singer's Rep Tells Nollywoodgists.com