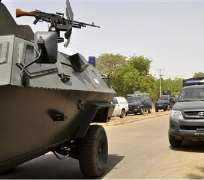 Nigerian forces raided the hideout of suspected Islamist militants in Kano on Tuesday, killing one of them in a gun battle that shook the main northern city.

The raid followed a series of attacks believed to have been carried out by Islamist sect Boko Haram in the past days which killed 30 people and dampened hopes that tighter security in the north had drastically reduced their capability.

Residents of the Sabuwar Gandu area of Kano awoke to several loud blasts and the sound of gunfire.

"Our men just raided one of the hideouts of the elements ... where we discovered explosives and weapons," said a spokesman for the Joint Task Force (JTF) in Kano, Lieutenant Iweha Ikedichi.

"The main suspect has been killed and we made many arrests but I can't say how many yet," he said, referring to an attack on a university in Kano, Nigeria's second biggest city, on Sunday.

Gunmen attacked a lecture theatre being used for Christian worship in Kano and a church in northeast Maiduguri, Boko Haram's headquarters, on Sunday, killing 19 people.

"Based on intelligence report on the suspects' hideout, a joint team comprising the soldiers, police and ... the State Security Service commenced that operation this morning," he said. "One of the suspects was killed in the process, three women and two children were taken into custody."

He said several AK-47 assault riffles, 467 rounds of ammunition and 45 cans filled with explosives were seized.

The shadowy sect says it is fighting to reinstate an ancient Islamic caliphate in Africa's most populous nation, whose 160 million people are split roughly evenly between Muslims and Christians along north-south lines.

"We were kept awake by bomb blasts and gunfire. It is really terrifying. We can't say where exactly the blasts are coming from. Everyone is indoors," Anthonia Okafor, a student at Kano university who lives in the Sabuwar Gandu area, told Reuters by telephone.

Hundreds have died in bomb and gun attacks across the north and in the capital Abuja since the Islamists launched their uprising in 2009, targeting authorities, security forces and more recently the north's Christian minority.

The insurgency has replaced militancy in the oil producing Niger Delta as the main security threat to President Goodluck Jonathan's administration and it has gained momentum since his election victory a year ago.

Suicide car bombers targeted the offices of newspaper This Day in Abuja and in Kaduna last week, killing at least four people and demonstrating the sect's continued ability to carry out coordinated strikes.