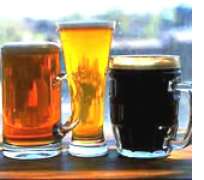 People who get a flushed face when they drink alcohol should be particularly wary of gullet cancer, experts warn.

About 8% of the population - mostly people of East Asian descent - have an enzyme deficiency that causes their skin to redden when they drink alcohol.

National Institute on Alcohol Abuse and Alcoholism research found even moderate drinkers with this deficiency were more at risk of oesophageal cancer.

The report authors told PLoS Medicine such people may benefit from screening.

Alcohol-induced flush is predominantly down to an inherited deficiency in an enzyme called aldehyde dehydrogenase 2 (ALDH2).

Although this is widely known, few are aware of the accumulating evidence that ALDH2-deficient individuals are at much higher risk of oesophageal cancer from alcohol consumption, say the researchers.

Dr Philip Brooks and his team from the National Institute on Alcohol Abuse and Alcoholism, working with Japanese colleagues, assessed how big the extra risk is.

They found individuals with one copy of the inactive gene causing ALDH2-deficiency were 6-10 times more likely to develop oesophageal cancer than individuals with the fully active ALDH2 enzyme who drank comparable amounts of alcohol.

They said if moderate or heavy drinking people with this deficiency were to become light drinkers instead, 53% of oesophageal cancers might be prevented among Japanese men.

Raising awareness
In the UK, a unit of alcohol is 8g and the Department of Health recommends men should not drink more than three to four units of alcohol a day, and women should drink no more than two to three.

Dr Brooks said: "Cancer of the oesophagus is particularly deadly, with five-year survival rates ranging from 12% to 31% throughout the world.

"And we estimate that at least 540 million people have this alcohol-related increased risk for oesophageal cancer.

"We hope that, by raising awareness of this important public health problem, affected individuals who drink will reduce their cancer risk by limiting their alcohol consumption."

He said doctors could determine ALDH2 deficiency simply by asking about previous episodes of flushing.

Then people could be counselled to reduce alcohol consumption, and those high-risk patients could be assessed for endoscopic cancer screening.

Oliver Childs, of the charity Cancer Research UK, said: "We know that drinking alcohol increases the risk of several different cancers, and that the more you cut down on your drinking, the more you reduce your cancer risk.

"This research helps us better understand how our environment and genes work in tandem to influence our risk of cancer."