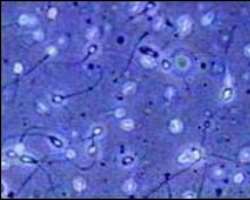 A male contraceptive pill could be a step closer after US researchers identified a gene flaw linked to male infertility.

The study of Iranian families found mutations in the CATSPER1 gene which controls a protein determining sperm movement.

Researchers say the finding could lead to treatments for infertile men - and potentially to a new contraceptive.

Condoms or a vasectomy are still the only male contraceptive choices.

UK researchers from the Medical Research Council Reproductive Biology Unit in have previously carried out surveys showing that men would be willing to take a contraceptive pill if one was available.

Hyperactive
In this study, the researchers were looking at a population with high rates of disease-causing gene mutations to investigate genetic causes of deafness.

However, while they were collecting genetic information, the scientists discovered that two families had different DNA mutations in the CATSPER1 gene.

The affected men's infertility was diagnosed using standard semen analysis. There were no other identifiable causes for their fertility problems.


Both mutations would likely lead to either a much shortened, non-working version of the protein the gene controls, or no protein at all.

Neither mutation was found in the DNA of 576 Iranian individuals who were also screened.

Tests on mice have previously found CATSPER1 mutations cause infertility because they affect sperm "hyperactivation" - the ability to move with the required energy and speed to enter the female egg during fertilisation.

Dr Michael Hildebrand, who led the research, said: "We have identified CATSPER1 as a gene that is involved in non-syndromic male infertility in humans, a finding which could lead to future infertility therapies that replace the gene or the protein.

He added: "Identification of targets such as the CATSPER1 gene that are involved in the fertility process and are specific for sperm - potentially minimising side effects of a drug targeting the protein's function - provide new targets for a pharmacological male contraceptive."

'Much work to be done'
A potential approach is to target CATSPER1 is immunocontraception, where antibodies are developed that bind to a targeted protein and block its function.

But the researchers stress that immunocontraception is still in the early stages of development and that, in order to be useful, it will need to be proven effective, safe and reversible.

Dr Allan Pacey, senior lecturer in andrology at the University of Sheffield, said: "Hyperactivation is important both to get sperm to move along the oviduct toward the egg and also in giving them sufficient power and thrust to be able to fertilise it.

"The fact that this study now suggests similar CATSPER mutations may also occurred in humans could explain why some men are unable to father a child naturally, in spite of having apparently normal semen quality."

But he added: "The authors are correct that this may also provide a new target for a revolutionary male contraceptive, although there is much work to be done in order to prove that approach would be both effective and safe."