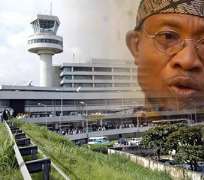 SAN FRANCISCO, April 29, (THEWILL) - The South West chapter of the Peoples Democratic Party (PDP) has asked security agencies to go beyond just stopping the Cuba trip of Action Congress of Nigeria (ACN) youths, and go a step further to investigate them and ascertain their level of involvement in the main mission for the trip.

Security agents at the Murtala Mohammed International Airport on Thursday night reportedly stopped the youths, numbering more than 50, from embarking on a trip to Cuba, sponsored by the governor of Osun State, Rauf Aregbesola.

“As against claims by the ACN government in Osun State that the trip was for student activists to witness the May day celebration in Cuba, we have information that only seven out of the youths billed to embark on the trip were students,” PDP’s zonal publicity secretary, Hon Kayode Babade alleged in a statement issued on Sunday.

The statement observed that other youths who were on the travelling team were drawn from Osun, Ekiti and Ondo States and they were not student activists.

“We wish to commend security agents at the Murtala Mohammed International Airport for aborting this Aregbesola’s evil trip to Cuba, a development that has vindicated us on our earlier stand that the Cuba trip was inimical to the corporate existence of Nigeria,” the statement stated.

“However, it is our belief that security agencies in the country must go beyond mere stoppage of the trip. They must investigate the youths that are involved in this trip.... Also, background checks must also be done on the affected youths so as to ascertain their past activities, political views and sources of

livelihood.
PDP argued that its concern on the issue was necessitated by present crisis of insecurity in the country in relation to Governor Aregbesola’s radical political

“Nigeria cannot afford another Boko Haram insurgence, hence our concern that activities of Aregbesola and his party, especially in relation to religious extremism and disintegration of the country, must not be treated with levity,” it pointed out.

“For instance, Governor Aregbesola’s continued defence of his change of Osun State to ‘The State of Osun’ is enough pointer to the fact that he (Aregbesola) and his party are desirous of precipitating crises in the country and this must be nipped in the bud before another Boko Haram challenge begins to stare us in the face.”