Would You Marry A Man Who Hated On Your Family? 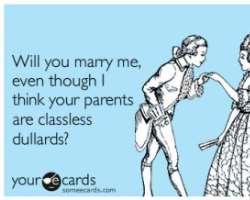 A woman wrote in to the Guardian this week seeking advice in dealing with her jackass of a husband who makes her feel “deeply inadequate as a wife” because her parents aren't rich like his. She writes that she and her husband are both in their late 20s and come from Indian backgrounds. “It is a very Indian tradition for a woman's parents to provide anything their sons-in-law ask for and treat them as princes. It is an old custom dating back to the days when women were not independent,” she writes, but explains: “My parents are from much humbler origins with very limited means compared to my in-laws.”

Her husband wants to begin his own business and her parents aren't in a position to provide the capital he needs, “although they would probably mortgage their home to help him if they were asked to.” She says her husband has berated her on several occasions for her parents' “lack of wealth, education and polish,” and though they love each other a lot, but his obscene jerkiness is putting a strain on their two-year marriage.

While this letter speaks specifically to Indian tradition, it addresses issues that cross culture. After all, classism, familial tensions, and general disrespect, unfortunately, know no cultural boundaries. Personally, I've always felt a little uncomfortable dating anyone outside my own socio-economic bracket for this precise reason. I'd never want to feel belittled or “inadequate” because of where I'm from and how I was raised. I dated a guy for nearly a year once whose family had more money than mine and he made me feel like a loser for not having more designer clothes in my wardrobe! That was bad enough, and even now I look back and wonder why the hell I stayed with him as long as I did. And while he never explicitly put down my family or my background, there was always an implicit message that he was more privileged than I, and therefore, somehow better. Better at being an a**hole, yeah.

Thankfully, that relationship was a mere blip on my dating history, a learning lesson I'm glad didn't cost me more, but I have to wonder what on earth possesses a woman to actually marry a guy who makes her feel inadequate over her background and belittles her family because of their class. Isn't that sort of a big deal? Isn't that a major red flag that perhaps the relationship is doomed, or at the very least, the guy is a real jerk? And doesn't such behavior say less about one's culture and more about his character?