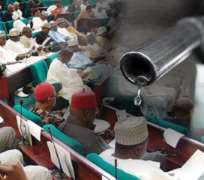 ABUJA, April 25, (THEWILL)- Seven civil society organisations on Wednesday in Abuja urged the Federal House of Representatives to mandate President Goodluck Jonathan to sack indicted officials for alleged “serious corruption or complicity” in the scam revealed by the lower chamber’s probe of the management of subsidy regime.

The groups said that the president should also consider the possibility of prosecuting the public officials and civil servants in the ministries of Finance and Petroleum, and the Accountant General’s office, who participated in the fraud either by connivance or negligence.

Speaking at a press conference, the groups decried the deliberate agreement among all the regulatory agencies in the oil industry not to keep records and to distort all processes aimed at controlling fraud and manipulations in the fuel subsidy administration.

The executive arm of government also received knocks for the blatant abuse of the 2011 Appropriation Bill, which resulted in the fraudulent escalation of the approved budget for fuel subsidy in 2011 from N245.96b up to N2.58tr.

They also expressed concern at the suspicious authorisation of 128 payments in split withdrawals of N999m each, totalling N127.872b by then Accountant General of the Federation (AGF), who is presently the governor of Gombe state, Ibrahim Hassan Dankwabo. They threatened to embark on certain undisclosed measures should government refuse to do their “peoper” bidding.

Mr. Clement Nwankwo of the Policy and Legal Advocacy Centre (PLAC) noted deep worries that subsidy was removed to the tune of 50 per cent from 2011 and N1.258tr was spent, but in spite of this reduction, the figure has been increasing.

“A thief is no better if he comes from my village, it does not matter where the president comes from,” he said. “What is important to Nigerians is that our economy is being poorly managed. Public officials found culpable in this fraud should be sacked and prosecuted.”

He charged the National Assembly to go beyond its recommendation by bringing people to account in order to spare the polity from degenerating to chaos.

Mr. Eze Onyekpere of the Centre for Social Justice argued that there must be a way to set a guarantee of non-repetition of such flagrant violation of our laws as seen in the fuel subsidy administration. “Those who have abused their offices should leave their duty post so that others who are interested in the progress of this nation can mount the saddle,” he added.

Other member rights group at the forum include Dan Nengel of the Community Life Project, Collins Okeke of the Human Rights Law Service, Dauda Garuba of the Revenue Watch Institute, Emmanuel Onwubiko of the Human Rights Writers' Association of Nigeria (HURIWA) and Mkpume Daniel of the Youth Action Initiative Africa.

They said: “In the light of the serious breaches of the law and constitution, civil society groups are calling on the National Assembly, particularly the House of Representatives, to take immediate action to bring all the officials concerned in the fuel subsidy scam to account and ensure the refund of all misappropriated funds to the treasury.”

They also called on the House of Representatives to immediately pass a resolution adopting the report of the Ad Hoc Committee on fuel subsidy and instruct the Economic and Financial Crimes Commission to commence immediate prosecution of all the officials indicted by the report.