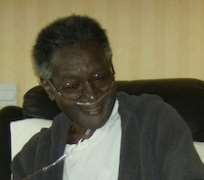 A Bristol actor who appeared in a Hollywood film has passed away, aged 80.

George Menta's most high profile film was Mister Johnson, in which he appeared alongside former James Bond Pierce Brosnan and English veteran Edward Woodward in 1990.

Acting was his passion and he became a household name in his home country in the 1980s and 90s.

Sponsored by his father who worked in the mining industry, he attended a prestigious private school and would tell his family that his pocket money at the time was more than a monthly British wage.

He initially studied law but later became a telephonist at the international telephone exchange for a time;working his way up to supervisor.

It was while living is London that he met his wife Corine through a friend.

When Mr Menta returned to Nigeria with his family in 1974 he initially went into farming but he later became an actor,which was his true passion and he stuck with it for the rest of his life.

He became a household name in Nigerian TV during the 1980s and 90s and was thought of highly by those he worked with,acting in the well known soap The Cock Crows at Dawn as well as other TV shows.

As the years passed,and his family gradually moved back to Britain,Mr Menta came to Bristol in 1996 to be with his family.

His son,Tivey said He really loved his family.They meant everything to him,they were his world.

His son,Antony,said He had high morals,was God-fearing and was there for his family.He was a good man and did everything for his family

Mr Menta passed away peacefully after a short illness.

His funeral is due to be held at St Peter's Church,Filton,on Friday,April 20.