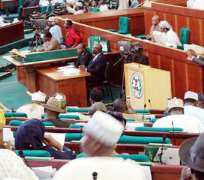 ABUJA, April 18, (THEWILL) - The Senate on Wednesday endorsed the use of brute force by the federal government in quelling insurgencies of the Boko Haram Islamist sect, urging the president to deploy all the instruments of national power in restoring security to the country.

It also directed its Joint Committee on Security, comprising National Security Intelligence, Defence and Army, Police Affairs, and Interior, to intensify their oversight functions over the security agencies in order to improve their capabilities in handling the security challenge.

The resolutions came in response to a motion sponsored by Sen. Mohammed Sani Saleh (CPC, Kaduna), who condemned the April 8 terrorist attack in Kaduna that killed over 40 innocent citizens.

In the lead debate, Saleh bemoaned the attacks, regretting they had continued unabated nationwide despite assurances by security agencies that they were on top of the situation. He expressed sadness that the attack happened right in the centre of Kaduna city in spite of numerous road blocks and checkpoints.

Other senators who spoke on the motion warned that the country is risking disintegration by its failure to curtail the activities of the extremists. They blamed the situation on the inadequacies of security agencies and the porosity of the country’s borders.

Deputy Senate President, Ike Ekweremadu observed that government should place premium on national security, as failure to do so could result to anarchy. He urged northern governors to be fully involved in putting in place measures to bury the sect, adding, “We will not discuss and disperse; that will not happen any longer. We will set up measures to follow up on the situation.”

In his submission, Sen. Enyinnaya Abaribe said the country is at war. “When we are at war, we need to do the needful. We are at war with those that want the country to break up. But I don't believe this people will break Nigeria up. It is only when we fail to do what we need to do that the country will break. Security has to step up to the challenge. We are aware of lack of cooperation among security agencies. As we speak to you there are no border patrols,” he added.

While Sen. Uche Chukwumerije, on his part, questioned the disposition of communities to battling the terrorists to a standstill, Sen. Chris Anyanwu cited the silence conspiracy of traditional leaders and the elite as part of the problem.

“All preachers of extremism, be they Christians or Muslims, should face serious consequences. It is brainwashing that has led to the current situation. There is too much conspiracy of silence. Our traditional rulers should be dethroned if they continue to tell us they don’t understand what happens in their domain. Many of our security operatives know nothing about security because they are not well trained. Our military is only trained for conventional war,” Anyanwu said.

Senator Olubunmi Adetumbi noted with disgust that Nigerians are beginning to make a mockery of resolutions reached by the Senate following previous debates on similar motions without effective implementation by the Executive.

“Where is the power of the Senate to make things happen?” she queried. “Nigerians are tired of condemnations of these attacks. They are asking whether there is a government in place. The government has failed to guarantee security of lives and properties. Boko Haram is not a religious, ethnic or political matter; it is a security matter that must be tackled urgently.”