WE ARE READY FOR BREAK-UP -NORTHERN LEADERS 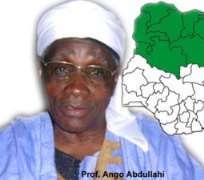 Northern leaders have called their southern counterparts' bluff, insisting that the North will survive in the event of a break-up of Nigeria.

But the northern leaders, under the auspices of the Arewa Elders Forum on Wednesday, said the North could stand on its own in a divided Nigeria.

Former adviser to ex-President Olusegun Obasanjo on Food Security, Prof. Ango Abdullahi, said on the British Broadcasting Corporation Hausa Service monitored in Kaduna that the region would survive on agriculture if the country divides.

However, Abudullahi said the North would not push for the break-up, as he alleged that some Nigerians had been hiding under the agitation for the convening of a national conference show to the world that they were tired of staying in a united Nigeria.

The former Vice-Chancellor of Ahmadu Bello University, Zaria, said, 'We have resolved that we are not going to be the cause of Nigeria breaking up but if others decide that the country should be divided, and they insist that Nigeria should break up, we won't say no because we realise there is nothing we are getting in the current arrangement that other sections of the country are not getting.

'If they insist, why don't we sit down and talk? If at the end everybody agrees that Nigeria should be divided, if in the long run, everybody is satisfied that the country should break up, let it be.'

The former presidential aspirant, who lamented insecurity in the country, and reiterated their resolve to work towards the continued existence of the nation.