Regular eggs 'no harm to health' 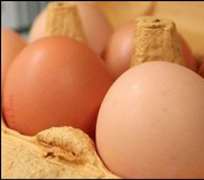 Eggs are packed full of nutrients Limiting egg consumption has little effect on cholesterol levels, research has confirmed. A University of Surrey team said their work suggested most people could eat as many eggs as they wanted without damaging their health.

The researchers, who analysed several studies of egg nutrition, said the idea that eating more than three eggs a week was bad for you was still widespread.

But they said that was a misconception based on out-of-date evidence.

Researcher Professor Bruce Griffin said eggs were actually a key part of a healthy diet, as they were particularly packed full of nutrients.

"The amount of saturated fat in our diet exerts an effect on blood cholesterol that is several times greater than the relatively small amounts of dietary cholesterol.

"The UK public do not need to be limiting the number of eggs they eat - indeed they can be encouraged to include them in a healthy diet as they are one of nature's most nutritionally dense foods."

While elevated blood cholesterol levels increase the risk of heart disease, only around a third of the cholesterol in the body comes from the diet.

Other factors such as smoking, being overweight and physical activity can influence blood fat and cholesterol levels and heart disease risk.

The British Heart Foundation (BHF) dropped its advice to limit egg consumption to three a week in 2007 in light of new evidence.

However, research by the British Egg Information Service suggests 45% of consumers still believe it was sensible to limit consumption.

Victoria Taylor, a senior BHF dietician, said: "We recommend that eggs can be eaten as part of a balanced diet.

"There is cholesterol present in eggs but this does not usually make a great contribution to your level of blood cholesterol.

"If you need to reduce your cholesterol level it is more important that you cut down on the amount of saturated fat in your diet from foods like fatty meat, full fat dairy products and cakes, biscuits and pastries."

In 2007 the Egg Information Service was banned from re-running a television commercial from the 1950s which urged viewers to "go to work on an egg" to celebrate its 50th anniversary.

The Broadcast Advertising Clearance Centre said the slogan went against the principle of eating a varied diet.