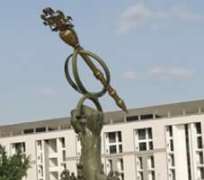 A staff of the Pension Accounts Office, Mr. Christian Madueke told the Senate yesterday how his bank account was used to steal N30billion for four years. The Upper Legislative Chamber of the National Assembly is investigating the fraud in the management and administration of pension fund. His colleague in the office, Margaret Panja Oyobi, whose bank account was also used to launder money, could not be specific on the amount.

They were grilled by the Senate Joint Committee on Establishment and Public Service and States and Local Governments in Abuja yesterday. The fund was stolen through a first generation bank under the guidance of one Mr. John Yusuf.

Madueke and Oyobi, who are both of the Pension Accounts Office had agreed to be witnesses for the Senate Joint Committee investigating pension fund administration in the country.

The duo acknowledged before the committee yesterday that their accounts were used as conduit pipes for the transfer of fund from pension accounts between 2007 and 2011.

On his part, Madueke, who narrowly escaped arrest at the venue of the Senate public hearing, further confirmed the transfer of over N30 billion into his account for four years and gave details of the transactions.

He said about 10 staff of the pension office, who have accounts with the said bank were used for that purpose as all their accounts were domiciled with Mr. Yusuf's account, who is in charge of the entire transactions.

Madueke also said that most of the time, the money was sent to their accounts without their consent and immediately they got the alert from the bank, they were compelled to withdraw it and then hand it over to the Accountant for onward transmission to other persons whom he said he did not know.

The 10 staff, said Madueke, were summoned last December by the Economic and Financial Crimes Commission (EFCC).

Asked by the committee why he agreed to the scam, Madueke replied: 'They see me as someone who will not revolt'.

When grilled on how much he received as commission for his account being used, 36-year-old Madueke said he received nothing except his 'transport money.'

They immediately suggested that he and Oyobi should be arrested immediately, but the committee Chairman, Senator Aloysius Etok, allowed them to go since they were under the protection of the Senate and had agreed to be witnesses.

Meanwhile, the committee has asked the EFCC to hands off the investigation of those connected with the monumental pension fraud following its findings that the commission was also an accomplice in the matter.

Two key witnesses, an Assistant Director in the Pension Accounts office, Mr. Toyin Ishola and Dr Suhaibu Teddy, who is also a Director in the pension office, had accused the EFCC for its role in the illegal withdrawal and transfer of pension fund and asked the committee to remove the EFCC from the investigation since it will also be investigated.

The accounts, Ishola maintained, were not with the approval or authorization of the Office of the Accountant-General of the Federation (AGF)

Both Lamorde and Waziri immediately agreed to the suggestion and the committee asked the police to take over the investigations.

It was Waziri, however, who had opened the can of worms in her presentation to the committee.

Waziri accused banks of colluding with corrupt pension officials to swindle the country billions of naira, adding that the banks even went as far as using accounts of EFCC operatives to launder money.

'The fraud that was discovered was monumental and I was shocked because I never would have believed that civil servants could do this to each other because one day, they are going to be also pensioners and these are their brothers and kins and the money meant for them, they carted them away.

'I had occasion to go for verification sometimes in Lagos and I wept there because people came, some carried them in blankets and they were there for months, some were dying and some of them have no bank accounts and people capitalize on that and in the end, what was given was pittance.

'There was this pretty lady and the money that was found in her accounts were mind-boggling; in the name of her mother and in her name.  It was just monumental. I called her and I looked at her and said: you are a mother, how could you be party to this?

'Her answer was that she was used, the men did this and I told her that was not an excuse.

'There was a big list of names and the suspect claimed these are all dead people that the money were being paid to and then this was of no use to me. I can compile names within one hour. No address, no certificate of birth, no death certificate. And I said, 'can you go back to the office and get me their local government areas?'

' I had scheduled 10 detectives to go and see the graves of these people and then we will assume that if the first 10 are all dead, then the whole lots of millions are real and we will find out who and who are collecting money.

'At this stage, he never came back and the story was that he was the one who unraveled the frauds.

'The recoveries were monumental. Everyday we recovered monies, in some of the account, they put money there and forgot and the fraud went on for long time in the pension office.

'These banks are not helping this country, they want funds at all cost, whether they are from dead bodies, they do not care as long as the monies is their accounts. Without that bank collusion, they couldn't have stolen these billions, it in the banks and they know it.

'Recently before I retired, there was a matter, a bank was sold to another bank and they were trying to steal money and one of our operatives, they now transferred N350 million into his account and N200 million into the Abuja branch. When we discovered these monies, within 30 minutes, it was withdrawn.

'Even on loans, I have a case of N40 billion… In this country, with high poverty level, one man borrowed N40 billion that he was going to sell diesel and come back and pay.

'He went and sold the diesel and later bought choice properties in Dubai without collaterals. A local government can do a lot with that money', Mrs Waziri said.

Winding up the public hearing, Sen. Etok asked the Permanent Secretary of the Office of Head of Service of the Federation (HOSF) to give details of how a N4.7 billion account was moved from one bank to another by a letter written by the former HOSF, Mr. Steven Oronsanye and another letter for the transfer of N4.6 billion.

Maina said his team recovered and saved N180 billion out of which N74billion was chanelled into the 2012 budget.