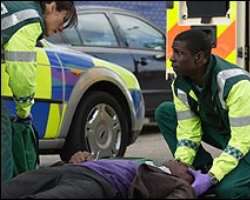 Watching TV shows like Casualty and ER makes people confident enough to try and resuscitate people in real life, a survey has suggested.

The poll of just under 2,000 people found one in five would try.

But the survey for first aid associations found 77% do not know how to give cardiopulmonary resuscitation.

A St John Ambulance spokeswoman said people should not be frightened of trying, even if they have only seen it done before on TV.

Isobel Sternfeld added: "When you're talking about things like CPR, you can't make things worse."

Empowerment
A quarter of a million people are involved in road traffic accidents every year. Their prognosis can be affected by who gets to them first.

And 4,000 people die in accidents in the home, with 2.7m going to A&E departments for treatment each year.

The survey, carried out for St John Ambulance, St Andrew's Ambulance Association and British Red Cross to mark First Aid Awareness Week found only one in four are fully confident they could give CPR.


FIRST AID AT HOME
Nosebleeds - head forward, pinch the bottom of the nose and hold for 10 minutes. Repeat up to two more times. If it does not stop, go to hospital

Fainting - leave the person on the floor, raise their feet and legs so blood flows to their organs and brain, let them get up in their own time

Toddler choking - hit them on the back up to five times, checking inside the mouth between each attempt.

If further help is needed, up to five firm presses on the chest can be given

It also found men are more confident about their abilities - 30% of the men surveyed would attempt resuscitation, compared with 20% of women.

But most of those surveyed said they did not know how to treat minor everyday injuries.

Sixty per cent were unaware of the correct way to deal with a nosebleed and 57% did not know how to help someone who had fainted.

One in three did not know what to do if a toddler was choking.

Andrew New from St John Ambulance said: 'We want to empower everyone to know what to do in an emergency.

"First aid is easy if you know what to do. You can go on a course to learn from the experts or buy the new manual which provides a simple step-by-step guide to how to deal with many different situations.

"No home should be without one."