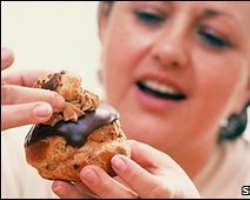 Too tempting to resist for women?
Listen to article

Men are more likely than women to be able to resist a plate full of tempting treats, American research suggests.

In an experiment in New York, a group of 23 volunteers were asked to try to suppress their hunger.

The men seemed to do better and brain scans later revealed they had far less activity than the women in a part of the brain linked to desire for food.

The researchers say this ability to "switch off" thoughts of food may explain lower rates of obesity in men.

The complex mechanisms which control how much we eat are not fully understood.

In the experiment, chronicled in the US journal, Proceedings of the National Academy of Sciences, the volunteers did not eat for a day and were then asked to suppress all thoughts of food.

In the UK rates of obesity are similar in men and women - but women are around three times more likely to be morbidly obese (a body mass index of above 30).

Emotional area
A brain scanner was then used to see if this was backed up by differences in the patterns of brain activation between men and women.

After the men were told to resist their cravings, there was far less activity in regions of the brain called the amygdala, hippocampus, orbitofrontal cortex and striatum.

All of these have been linked by other studies to "emotional regulation" and memory activation - suggesting that the men were retrieving their memories of the desired food less - perhaps making them less affected by the thought of it.

The researchers wrote: "Lower cognitive control of brain responses to food stimulation in women compared to men may contribute to gender differences in the prevalence rates of obesity and other eating disorders."

They conceded that subtle changes in the female response to food driven by sex hormone changes at different points in their monthly cycle might skew the results.

"Men are more single-minded than women and tend to commit themselves more," he said.

"Women on the other hand are much more concerned with the needs for others around them.

"The second reason is oestrogen. Women have plently, and men don't. Oestrogen works to promote weight gain, or resist weight loss, in women and makes it harder for them to lose weight."

"This study demonstrates the need for weight management programmes to recognise the different needs of different genders, ages, and social and cultural backgrounds. The diet that works best, is the one you want to do."

Dr Andy Calder, a scientist at the MRC Human Cognition Unit at Cambridge University, said that given the relatively small number of people involved, it was hard to be certain whether the difference between men and women was genuine.

He said: "Across the population in general, there may be differing factors in terms of how people respond to food.

"It is also possible that, as a trait, some of the women involved may be more prone to anxiety, which could account for the differences."