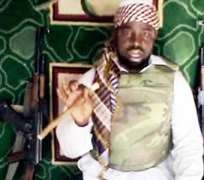 The leader of a radical Islamist sect in Nigeria has challenged the nation's president, saying he could never destroy the group blamed for hundreds of killings this year alone, according to an online video posted Thursday.

The 14-minute video posted to YouTube showed Shekau in a white robe, with gunmen holding Kalashnikov rifles around him. A heavy machine gun leaned against a wall as he spoke first in Arabic and later in the Hausa language of Nigeria's Muslim north.

Shekau said President Goodluck Jonathan would be unable to stop the group's attacks.

"Jonathan, you the helpless, we heard that you intend and want to destroy us, but this talk is useless when it is said by an infidel because only God can destroy us," Shekau said in Arabic. "Until now, nobody was able to do that (destroy us), and you too will not be able to do anything, with God's help."

Nigeria's north has been under increasing attack by Boko Haram, which is blamed for more than 390 killings this year alone, according to an Associated Press count. Boko Haram has killed Christians, Muslims and foreigners in its growing fight against the Nigerian government over the introduction of strict Shariah law across the country and the release of all imprisoned followers.

Nigeria, a multiethnic nation of more than 160 million people, is split largely between a Christian south and a Muslim north. Anger over crushing poverty and corrupt politicians has grown more acute in recent years in the north, fueling resentment against the government and the West in this oil-rich nation.

The video posted Thursday included no claims of responsibility for a suicide car bombing Easter Sunday in Kaduna that killed at least 41 people. Suspicion for the attack immediately fell on the group as witnesses said the suicide bomber had been apparently trying to get close to a church before the explosion. Boko Haram has attacked churches in the past, as well as the U.N. headquarters in Nigeria's capital Abuja.

Meanwhile Thursday, a military spokesman said suspected gunmen from the sect shot dead a Christian Igbo trader at a market in Maiduguri, the city where the sect once had its main mosque. Witnesses blamed another shooting Wednesday night on the sect, as a flyer pasted on the wall of the home of the deceased bore a warning that people should not criticize the sect.

The video Thursday showed a new sophistication for the group. Shekau has issued videos via YouTube in the past, though this one included a Hausa-language song at the beginning about the sect, saying its members were ready to kill nonbelievers.

The beginning of the video also showed a logo of two crossed Kalashnikov rifles around a Quran and a black Islamist flag. That symbol mirrors one used by al-Qaida in the Islamic Maghreb, a group that diplomats and officials believe has loose ties with Boko Haram.

At one point, Shekau even smiles as he describes the ongoing fighting between Boko Haram and the government.