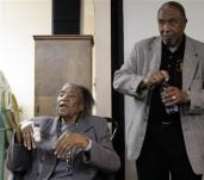 When Barack Obama is sworn in next week as the first black U.S. president, 97-year-old Alabama civil rights veteran Amelia Boynton Robinson will see a miracle in the milestone.

"I think it's an act of God," said Robinson, who was jailed and beaten decades ago in the racially segregated U.S. South.

For Robinson, whose mother was born just a few years after the end of slavery, the fight for equality did not end with the civil rights laws passed in the 1960s and it won't end with Obama's historic inauguration on January 20.

"To this day, I am still on the battlefield," Robinson told 35 educators, students and activists last week in Tuskegee, Alabama, during a four-day tour of civil rights historic sites in Selma, Montgomery and Birmingham, Alabama.

Obama's election has rekindled interest in the U.S. civil rights movement of the 1950s and 1960s amid continuing racial tensions and wide disparities in income, education and health care between whites and minority groups.

In Alabama, visitor numbers are up dramatically at a center that marks the route of a five-day, 47-mile march led by King from Selma to Montgomery in 1965 by 25,000 people demanding equal rights for black Americans, said Tina Smiley of the U.S. National Park Service.

Doug McMillon, chief executive of the Sam's Club unit of Wal-Mart Stores Inc, has brought four large groups of executives to the center in recent months, and has commissioned a film so all his workers can share the experience, she said.

Activists Charles Alphin and Bernard Lafayette organize civil rights tours such as the one Robinson addressed.

Robinson, who once hosted Martin Luther King Jr. in her home, will travel to England next month to teach the principles of non-violence used in the sit-ins, mass arrests and protests that characterized the movement.

In the 1930s, she started a voter registration drive in Selma, Alabama, where African-Americans were hindered from voting until the mid-1960s by capricious literacy tests, poll taxes and the need to produce two white "sponsors."

Robinson catapulted the issue into the limelight in 1965 when she asked King for help.

Soon afterward, King led the historic voting rights marches in Alabama. On what came to be known as "Bloody Sunday," white authorities beat and tear-gassed protesters and television images flashed around the world.

A LONG ROAD
"It's the screaming I remember most," says Joanne Bland, who was 11 years old when she was knocked unconscious on Bloody Sunday. Her 14-year-old sister needed 26 stitches on her head; but both girls marched again the next Tuesday.

The violence sparked outrage and solidarity marches around the country and helped prod Congress into passing the Voting Rights Act of 1965, a law that finally secured the right of African-Americans to vote.

Bland ran Selma's voting rights museum and now leads tours of the 20,000-plus town that is grappling with a high crime rate, drug problems, severe poverty and rising unemployment.

Bland says the Selma movement paved the way for the election of Obama, who visited the city in 2007.

"What we did here in Selma is why he was able to be elected," she said.

Obama often credits the black Americans whose struggle made his personal road to the White House possible.

"It's important for people to study and learn about this period of history so that we can continue to build on King's work and his philosophy," added Roger Vredeveld, 47, who teaches U.S. and black history in Chattanooga, Tennessee, and went on the tour.

Some analysts have described Obama's victory as ushering in a "post-racial" era, but civil rights activists say there is still much to be done. They point to such crises as Hurricane Katrina in 2005, which revealed deep racial divides, and recurrent cases of police brutality.

Another teacher on the tour, Arthur Romano, cited riots in Oakland, California, after the January 1 shooting of an unarmed 22-year-old black man by a white transit police officer, and said King's non-violent approach would be far more productive.

Oscar Grant's death, he said, "serves as a reminder of how far there is to go, and the need for serious, strategic and long-term community involvement on these issues."