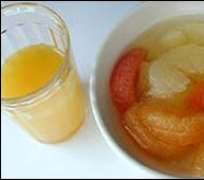 There is no evidence that products widely promoted to help the body "detox" work, scientists warn.

The charitable trust Sense About Science reviewed 15 products, from bottled water to face scrub, and found many detox claims were "meaningless".

Anyone worried about the after-effects of Christmas overindulgence would get the same benefits from eating healthily and getting plenty of sleep, they said.

Advertising regulators said they looked at such issues on a case-by-case basis.

The investigation, done by research members of the Voice of Young Science network, was kicked off by a campaign to unpick "dodgy" science claims - where companies use phrases that sound scientific but do not actually mean anything.

They challenged the companies behind products such as vitamins, shampoo, detox patches and a body brush on the evidence they had to support the detox claims made.

No two companies seemed to use the same definition of detox - defined by the Oxford English Dictionary as the removal of toxic substances or qualities.

In the majority of cases, producers and retailers were forced to admit that they had simply renamed processes like cleaning or brushing, as detox, the scientists said.

Toxins
One researcher investigated a Garnier face wash which claimed to detoxify the skin by removing toxins.

The "toxins" turned out to be the dirt, make-up and skin oils that any cleanser would be expected to remove, she said.

A five-day detox plan from Boots which claimed to detoxify the body and flush away toxins was also criticised for not being backed by evidence.

Evelyn Harvey, a biologist who looked into the product, said that if consumers followed the healthy diet that was recommended alongside the supplement they would probably feel better - but it would have nothing to do with the product itself.

The researchers warned that, at worst, some detox diets could have dangerous consequences and, at best, they were a waste of money.

Tom Wells, a chemist who took part in the research, said: "The minimum sellers of detox products should be able to offer is a clear understanding of what detox is and proof that their product actually works.

"The people we contacted could do neither."
Alice Tuff, from Sense About Science, added: "It is ridiculous that we're seeing a return to mystical properties being claimed for products in the 21st Century and I'm really pleased that young scientists are sharing their concerns about this with the public."

The Advertising Standards Authority said it would investigate such claims on a case-by-case basis if a complaint was made.

"If a product is making claims not substantiated by the evidence submitted by the company we would challenge that."

A spokeswoman from Boots said its five-day detox plan encouraged people to drink water and includes ingredients that "battle against toxins and help protect from the dangers of free radicals".

And Garnier commented: "All Garnier products undergo rigorous testing and evaluation to ensure that our claims are accurate and noticeable by our consumers."